On July 24, 2020 the Parliamentary Budget Officer (PBO) reported on costs incurred from the Government’s policy of allowing employees to use pay code 699 paid leave for other reasons.[i]  Guidance from the Treasury Board Secretariat (TBS) allowed for employees to request 699 leave for a variety of reasons including being sick with COVID-19, having to quarantine, not being able to access the technology they need to complete their work, and having to care for dependents.

Through information request IR0504 (July 2020), the Government subsequently shared new data which the PBO used to provide updates on the evolution of these costs.[ii]  The most recent data update received by the PBO on October 12, 2021 covers the period from March 15, 2020 to July 31, 2021 for 86 of the 90 federal public service organizations governed by the Financial Administration Act Schedules I, IV and V.  These 86 organizations represent 99% of federal public servants employed as of July 31, 2021.[iii]

Consistent with our prior findings, use of 699 leave continues to decrease (Figure 1).  After reaching a peak of 1.75 million hours in the week ending April 5, 2020, the number of weekly hours of leave has decreased by 99% to 24 thousand hours in the last week of July 2021.  On November 9, 2020 TBS enacted new guidance on 699 leave, namely that it will be granted on a case-by-case basis and generally only after other relevant paid leave has first been used by the employee.[iv]  The data shows that in the four preceding weeks (October 12 to November 8, 2020) the weekly number of hours of 699 leave taken was relatively stable between 104 thousand and 129 thousand.  In the following four weeks (November 9 to December 12, 2020), that number nearly fell by half and was now between 60 thousand and 66 thousand hours per week.  The weekly number of hours continued to steadily decrease in the following weeks, except for a short increase in the spring of 2021, which corresponds to the third wave of the pandemic where many schools closed for a few weeks. 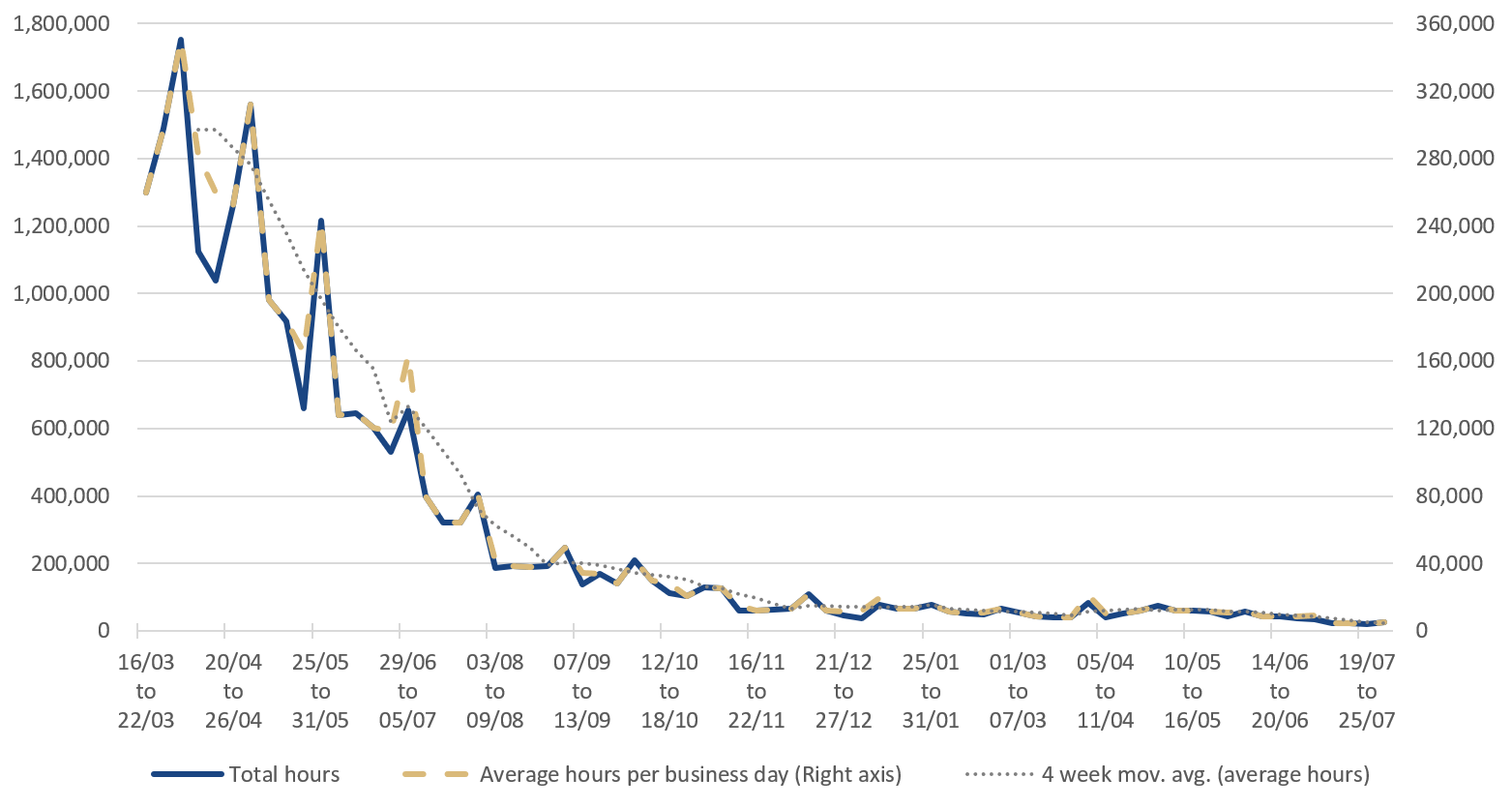 As explained in the previous reports, there are spikes in the weekly data because of a tendency to record leave usage at the end of the month rather than when it is taken, and dips because of statutory holidays.  Therefore, the dashed line in Figure 1 shows the average number of hours of leave per business day and the dotted line is a four-week moving average to better represent what the weekly usage of 699 leave would have been if not for this end-of-month anomaly.

While the total number of hours of 699 leave has significantly reduced over the weeks, the average number of weekly hours of leave per distinct employee using 699 leave during that week has remained somewhat stable around an average of 22 hours.  Figure 2 presents the evolution of the average weekly hours of 699 leave per distinct employee using the leave.  The dashed line represents the weekly hours adjusted for holidays and differs from the solid line only in weeks where there was a statutory holiday.[v]  The week of December 7 to 13, 2020 is somewhat of an outlier with employees using on average 43.5 hours of 699 leave during that week.  The government of Quebec had announced in late November 2020 that schools would be closed from December 17 to 23, 2020 (the week following the unusual spike).  As we know that leave usage was not always reported in the period used for some organisations, it is possible that federal employees living in Quebec and planning to be on leave the following week to take care of their school aged children have entered their leave in the system the week before. 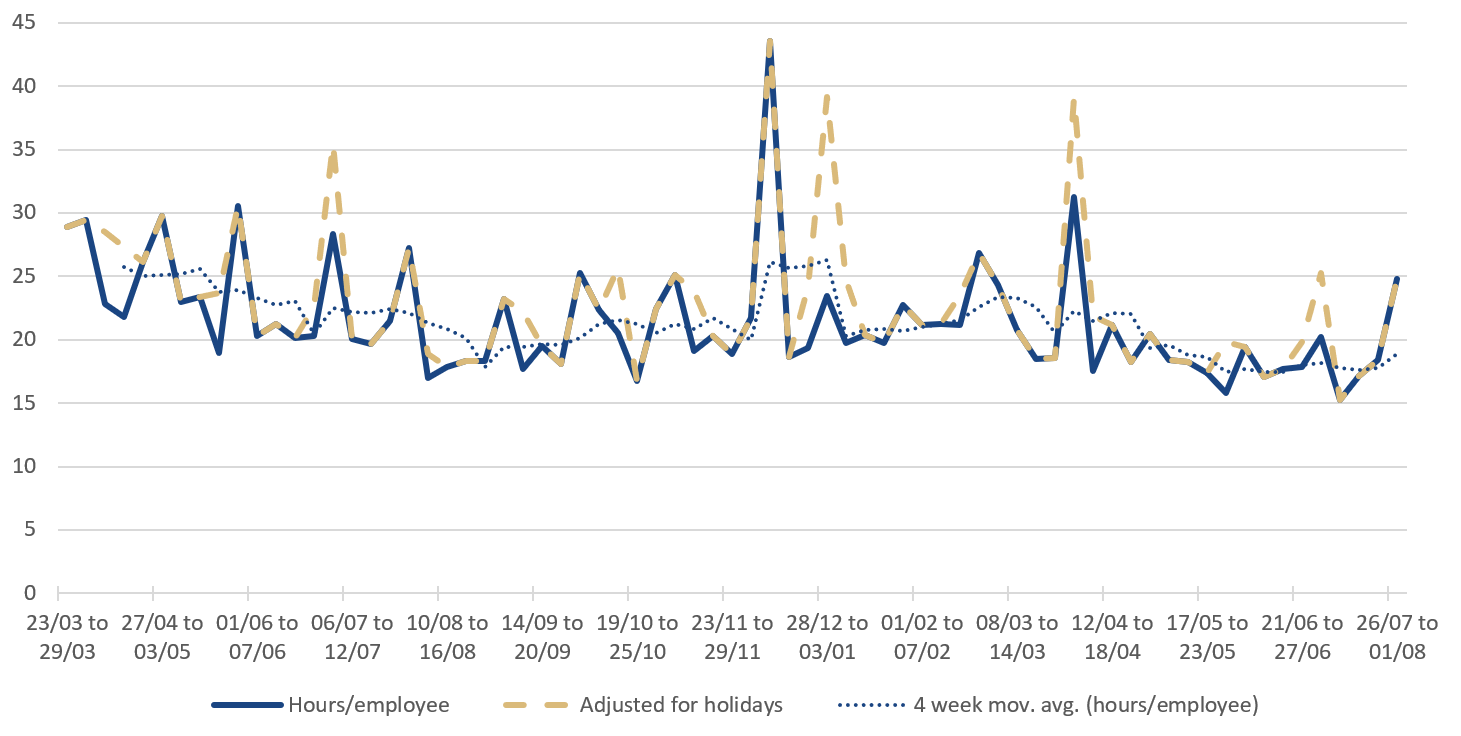 As indicated previously, the usage of 699 leave was likely underreported by many organizations.  Indeed, in each subsequent data update provided by TBS, there was an increase in the number of hours previously reported.  The data the PBO received from TBS on October 12, 2021 was the first not to report an increase in the number of hours of 699 leave in March 2020 compared to the previous data update (which was received on July 27, 2021).  Nonetheless, the latest data update shows an increase from the previous update of almost 4,000 hours for the months of April, May and June 2020.  This represents an increase of less than 1% in the total number of hours reported between April and June 2020, but it shows that organizations are still updating 699 leave usage of their staff more than a year after that leave was taken.  Out of 90 organizations, TBS only reported on 62 of them in June 2020 and increased progressively to 86 since late November 2020.  It will have therefore taken eight months for some organizations to report on their 699 leave usage in the beginning of the pandemic.

As mentioned in the previous reports, TBS was unable to provide actual personnel expenditures for the survey period.  Using 2018-2019 personnel expenditure data provided through information request IR0074, the PBO estimates a cost of nearly $1.27 billion between March 2020 and July 2021 for leave taken under code 699, inclusive of pension and other benefits.[vi]  This includes PBO’s extrapolation of costs for the departments for which no data are available.  Note that unions representing public servants have filed policy grievances against the government because of the new guidelines that became effective in November 2020.[vii]  Depending on the outcome of the dispute, the costs associated with 699 leave in Table 1 for the months of November 2020 and after could be significantly higher.  The costs of 699 leave presented in Table 1 do not, for the most part, involve additional spending for the federal government but are instead costs in terms of lost hours of output.  However, if the policy grievances are settled in favour of the employees, this could involve additional spending for the government.

Sources: Treasury Board Secretariat of Canada and PBO calculations.

The total cost shown in Table 1 represents an 8% increase from our previous update published on March 2, 2021.  The increase comes from the addition of eight months of data (the months of December 2020 to July 2021).  We now also have enough data to estimate the total cost for fiscal year 2020-21, which amounts to $1,028 million.

As previously reported, the Canada Revenue Agency (CRA) is responsible for most of the 699 leave, representing (as of July 31, 2021) 43% of the total cost since the beginning of the pandemic.  Table 2 shows the five organizations with the highest hours used per month and their respective percentage of total hours.  The CRA and Correctional Services Canada are the only organizations to appear in the top 5 every month since the beginning of the pandemic.  The Canada Border Services Agency appears in the top 5 for 15 of the 17 months of data available while National Defence appears 14 times.  Most departments reported their total highest hours in April 2020 (18) or May 2020 (37).  Only seven departments reported more hours used in June 2020 than in April or May, and two reported more hours in July 2020 than any other month.

Table 4 provides another measure of intensity in terms of the cost of 699 leave divided by personnel spending.[viii]  At the height of 699 usage in April and May 2020, we can see that the Canada Revenue Agency, the Immigration and Refugee Board of Canada, and Veteran Affairs Canada were the three departments with the most intensive usage.  However, for the full data sample (March 2020 to July 2021), the Office of the Governor General’s Secretary still had the most intensive usage of 699 leave (representing 11% of all their personnel cost over the same period), followed by the Canada Revenue Agency (9%) and the Immigration and Refugee Board of Canada (6%).

Table 4: Cost of 699 leave usage as a percentage of personnel spending

Finally, Figure 4 presents the breakdown of hours by type of 699 leave (leave for technology reasons, sick leave, family leave, etc.).[ix]  Excluding hours for which the reason is not provided, work limitations were the main cause for using 699 leave in the beginning of the pandemic (April and May 2020), followed by family care.  For the following months (June to September 2020), family care was the main reason for taking 699 leave (representing between 26% and 34% of all 699 leave).  In October 2020, illness was now the primary reason, representing 29% of all 699 leave in that month.  Then in November 2020, a new category named high risk was introduced.[x]  For the remaining months, the combination of illness/high risk was the main reason except in June 2021, where family care slightly surpassed it (35% vs 34%).  Since the beginning of the pandemic, work limitation represents 40% of all hours reported, followed by family care at 31%, technology at 16%, illness at 11% and high risk at 3%. 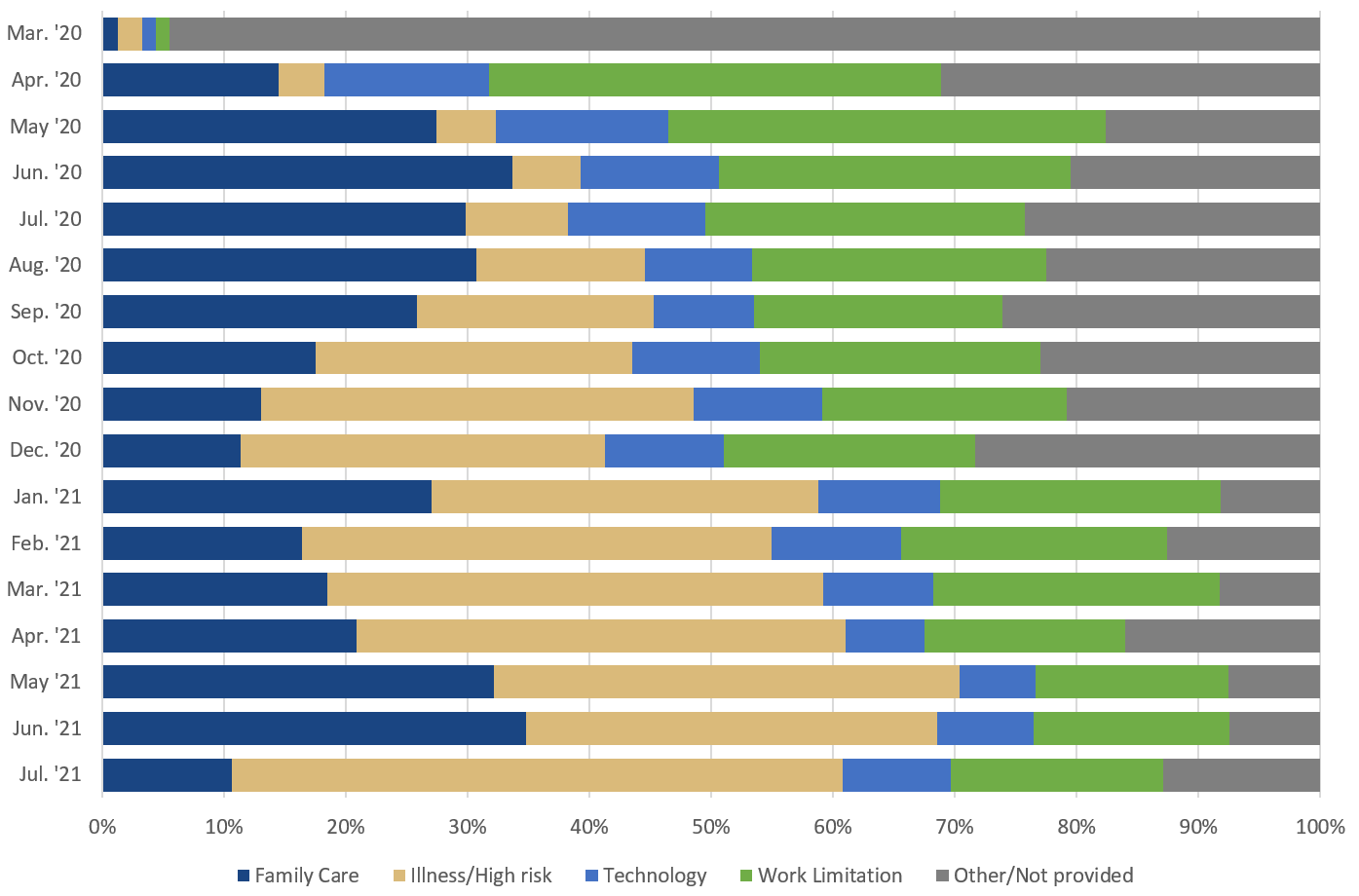 It is also interesting to note that while work limitation was the cause behind most of the hours of 699 leave taken, for the months of April to October 2020 more than half of the organizations for which a breakdown by cause was provided reported family care as the main reason for 699 leave.  Since CRA was a heavy user of 699 leave in the beginning of the pandemic with all taxpayer audits on pause (which fell under work limitation), it can explain why work limitation was the main cause in terms of all hours across the public service.

The PBO will continue to monitor the usage of COVID-19 related leave in the federal public service.

[iii] Note that the data provided by TBS does not cover employees of Crown corporations (such as Canada Post, the Canadian Housing and Mortgage Corporation or the Business Development Bank of Canada, to name a few). These organizations are listed in Schedule III of the Financial Administration Act.

[v] The hours per employee adjusted for holidays are calculated by taking the hours per employee and dividing them by the number of business days in each week (for example 4 business days for the week containing July 1st) and multiplying the result by 5. This method will likely overestimate the number of hours in weeks with a statutory holiday for organisations that remain open on holidays such as Correctional Services Canada for example.

[vi] The PBO’s estimate in the first report (published on July 24, 2020) only accounted for salary at and average cost of $309 per employee per day. The average cost across government inclusive of pension, benefits, and other personnel costs is $481 per employee per day and was used to estimate costs in the updates published on August 24, 2020, December 1, 2020, and March 2, 2021, as well as in this update. Per-department costs were used in the estimate whenever possible. The CRA has lower than average per-employee costs which decreased the overall average cost.

[viii] Personnel spending is estimated from data received through information request IR0074, except for the Office of the Governor General’s Secretary which is taken from their Quarterly Financial Reports (https://www.gg.ca/en/the-office/quarterly-financial-reports).

[ix] The breakdown data for the month of March 2020 is scarcer, which is not surprising given the fact that even the CRA had not implemented these types of 699 leave codes in its time tracking system until the first week of April 2020. It is not clear however, how federal organizations were able to identify these hours retroactively, given that we were told in July 2020 that only two departments had the system capabilities to provide such a breakdown.

[x] Starting in November 2020, a new category was introduced: High risk. It represents leave taken by employees who are at high risk for severe illness from COVID-19, as described by the Public Health Agency of Canada, or have a duty of care of someone who is at high risk for severe illness from COVID-19. This new category represents slightly more than one third of the total for Illness/High risk in November 2020, then about half from December 2020 to May 2021 and finally over two thirds in the last two months of data (June and July 2021). For more details on the categories of leave, see: https://www.canada.ca/en/government/publicservice/covid-19/employee-illness-leave.html