On July 24, 2020 the Parliamentary Budget Officer (PBO) reported on costs incurred from the Government’s policy of allowing employees to use pay code 699 paid leave for other reasons.[i]  Guidance from the Treasury Board Secretariat (TBS) allowed for employees to request 699 leave for a variety of reasons including being sick with COVID-19, having to quarantine, not being able to access the technology they need to complete their work, and having to care for dependents.

Through information request IR0504 (July 2020), the Government subsequently shared new data which the PBO used to provide updates on the evolution of these costs.[ii]  The most recent data update received by the PBO on February 1, 2021 covers the period from March 15 to November 30, 2020 for 86 of the 90 federal public service organizations governed by the Financial Administration Act Schedules I, IV and V.  These 86 organizations represent 99% of federal public servants employed as of November 30, 2020.

Consistent with our prior findings, use of 699 leave continues to decrease (Figure 1).  After reaching a peak of 1.72 million hours in the week ending April 5, the number of weekly hours of leave has decreased by 97% to 51 thousand hours in the last week of November.  On October 22, 2020 the Chief Human Resources Officer from TBS provided new guidance on 699 leave, namely that it will be granted on a case-by-case basis and generally only after other relevant paid leave has first been used by the employee.[iii]  These new guidelines were effective starting on November 9, 2020. The data shows that in the four preceding weeks (October 12 to November 8, 2020) the weekly number of hours of 699 leave taken was relatively stable and hovered slightly above 100 thousand.  For the three following weeks (November 9 to 29, 2020), that number fell by half to slightly more than 50 thousand hours per week.

As explained in the previous reports, there are spikes in the weekly data because of a tendency to record leave usage at the end of the month rather than when it is taken, and dips because of statutory holidays.  Therefore, the dashed line in Figure 1 shows the average number of hours of leave per business day and the dotted line is a four-week moving average to better represent what the weekly usage of 699 leave would have been if not for this end-of-month anomaly.

As indicated previously, the usage of 699 leave was likely underreported by many organizations. Indeed, in each subsequent data update provided by TBS, there was an increase in the number of hours previously reported.  For example, the data the PBO received on July 10, 2020 represented an increase of 9% in the total number of hours reported between March and May 31, 2020 from the data received on June 11, 2020 covering the same period. Figure 2 shows the evolution of the weekly hours reported between March and July 2020 in each data update received by the PBO.  Most of the increase between each update comes from the inclusion of additional organizations.  Out of 90 organizations, TBS reported on 62 of them in June 2020, increasing to 86 in February 2021.

Figure 2: Total number of hours of 699 leave reported in each data release by TBS 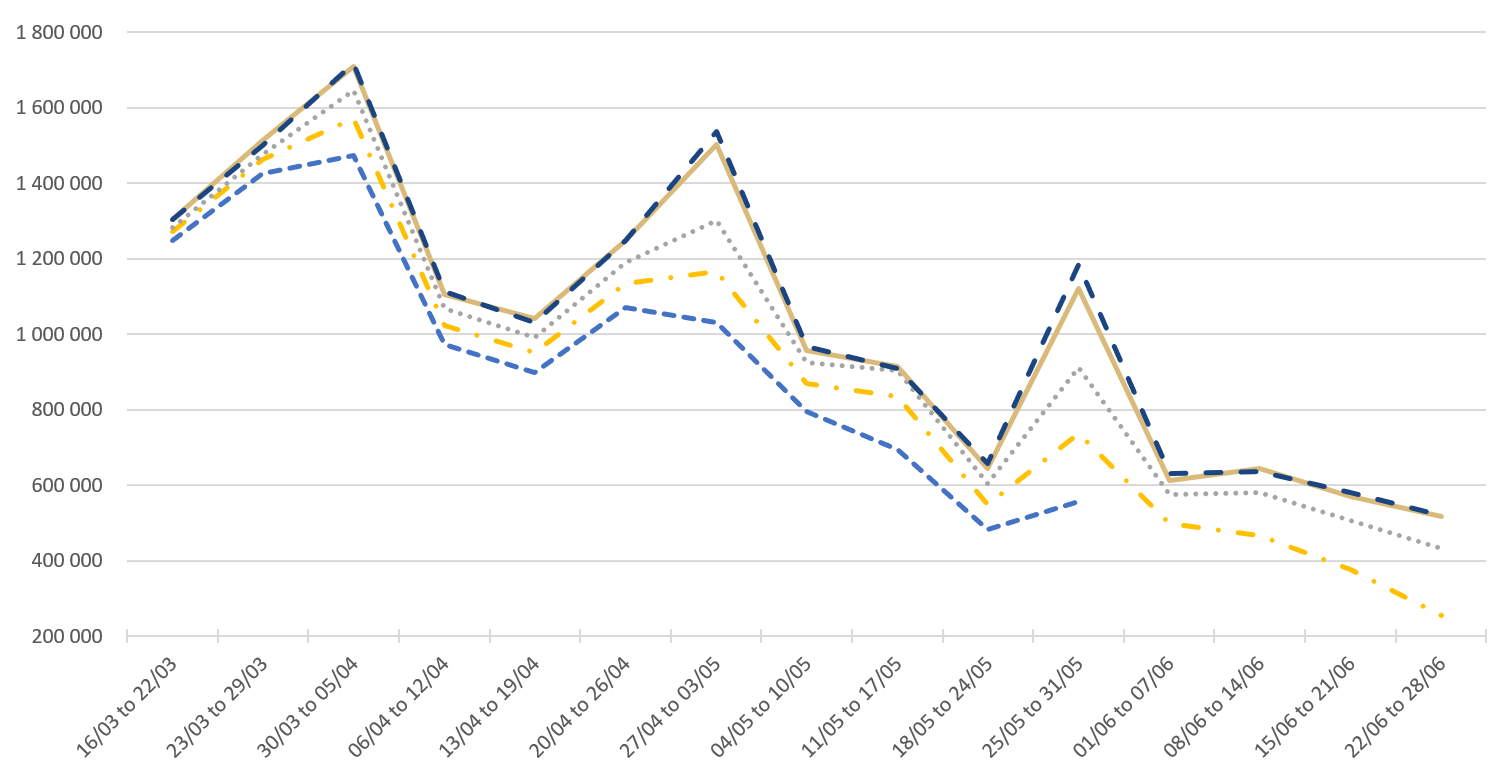 Nonetheless, there was an increase in the number of hours reported in each update among the 43 organizations on which TBS individually reported on in June 2020.[iv]  Figure 3 depicts the evolution in the total number of hours of 699 leave reported between March 15 and May 31, 2020 (the initial reporting period of the first data release by TBS) for the 43 organizations on which individual data was reported in the first data release. As can be seen, this number went from 10.7 million hours to nearly 12 million hours in the last data update, a 12% increase. This shows that organizations were still updating the number of hours recorded between March and May several months later.

Figure 3: Total hours of 699 leave usage between March 15 and May 31, 2020
in the 43 organizations included in the first data release, by data release 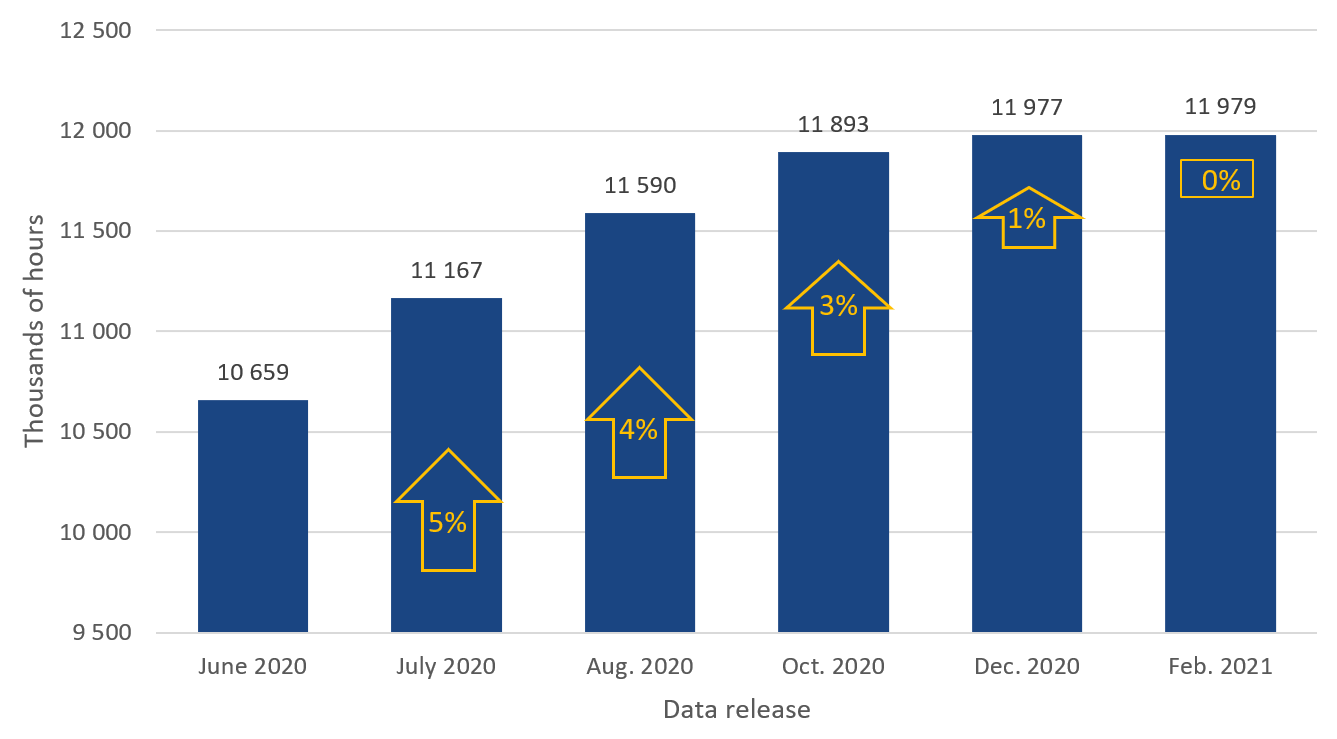 Sources: Treasury Board Secretariat of Canada and PBO calculations
Note: The arrows represent the percentage change between each data release.

As mentioned in the previous reports, TBS was unable to provide actual personnel expenditures for the survey period.  Using 2018-2019 personnel expenditure data provided through information request IR0074, the PBO estimates a cost of nearly $1.2 billion between March and November 2020 for leave taken under code 699, inclusive of pension and other benefits.[v]  This includes PBO’s extrapolation of costs for the departments for which no data are available.  Note that unions representing public servants have filed policy grievances with the government because of the new guidelines effective in November.[vi]  Depending on the outcome of the dispute, the costs associated with 699 leave for November in Table 1 could be significantly higher. The costs of 699 leave presented in Table 1 do not, for the most part, involve additional spending for the federal government but are instead costs in terms of lost hours of output.  However, if the policy grievances are settled in favour of the employees, this could involve additional spending for the government.

The total cost shown in Table 1 represents a 9% increase from our previous estimate.  Almost all the increase (99.9%) comes from the additional months of data provided (September to November).  Less than 0.1% of the increase stems from upward adjustments to data for the period covered in our previous update.  Note that the monthly totals in Table 1 are not comparable to those presented in our previous update.  In the previous data updates, TBS calculated monthly totals by summing the weekly totals of every week ending in a given month.  For example, the week of April 27 to May 3, 2020 was included in the monthly total for May.  However, in the most recent data update from TBS, the leave usage between April 27 and 30 is now counted in April’s total.

As previously reported, the Canada Revenue Agency (CRA) is responsible for most of the 699 leave, representing (as of November 30) 42% of the total cost since the beginning of the pandemic.  Table 2 shows the five organizations with the highest hours used per month and their respective percentage of total hours.  The CRA continues to account for a decreasing share of hours used, from 73% in March to 14% in November. Most departments reported their total highest hours in April (19) or May (36). Only 6 departments reported more hours used in June than in April or May.

Finally, Figure 4 presents the breakdown of hours by type of 699 leave (leave for technology reasons, sick leave, family leave, etc.).[vii]  Excluding hours for which the reason is not provided, work limitations were the main cause for using 699 leave in the beginning of the pandemic (April and May), followed by family care. For the following months (June to September), family care was the main reason for taking 699 leave (representing between 27% and 34% of all 699 leave).  In the last two months of data, illness is now the primary reason, representing 26% of all 699 leave in October and 38% in November.[viii] However, since the beginning of the pandemic, illness represents only 6% of all hours reported, while work limitations and family care represent 27% and 20% respectively. 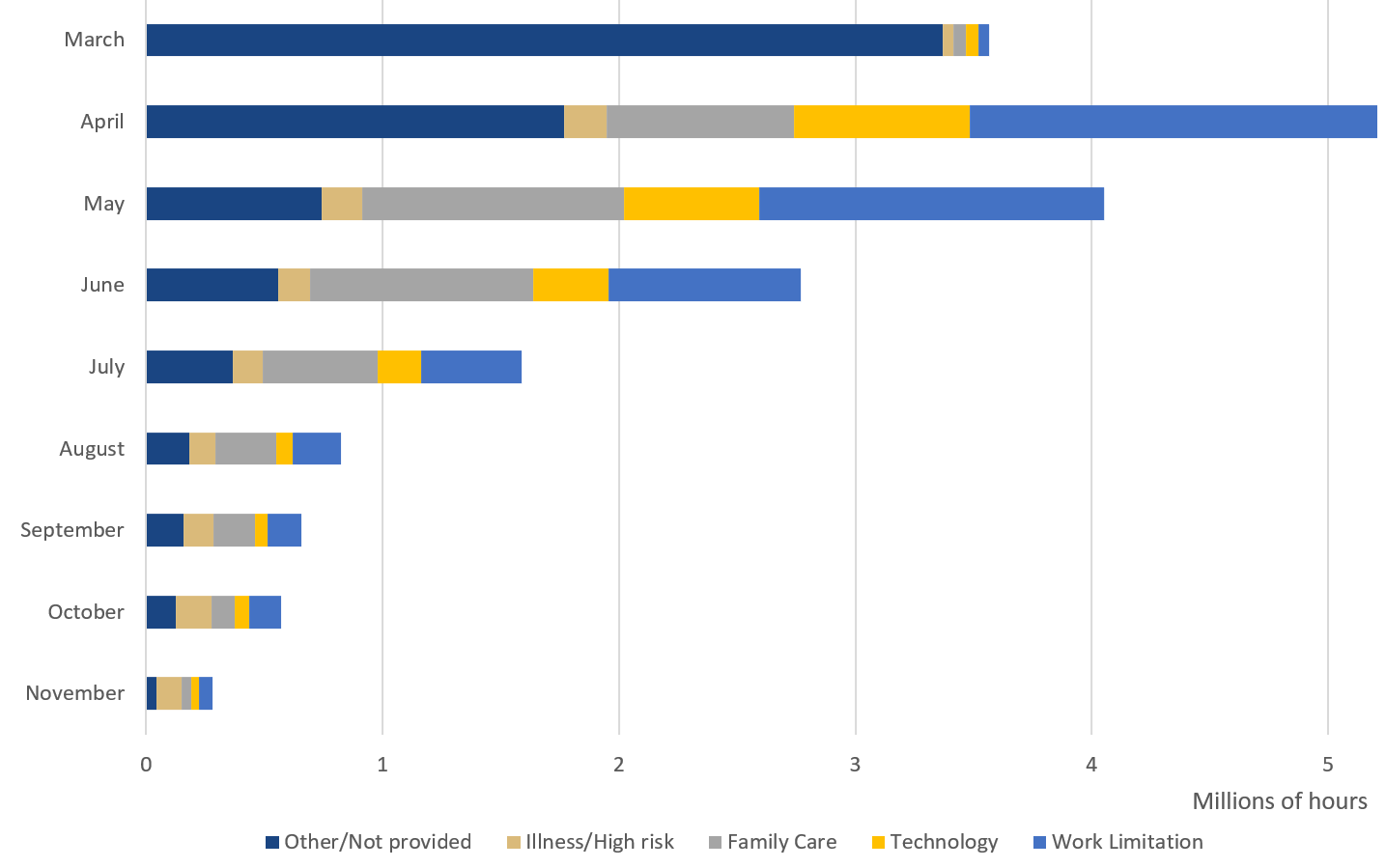 The PBO will continue to monitor and report on expenditures related to the usage of COVID-19 related leave in the federal public service.

[iv] While the first data release by TBS covered 62 organizations, the data was broken down by organization for only 43 of them. The remaining 19 organizations were added together in the “Other” category in order to respect the data privacy of employees in departments/agencies with 10 or fewer employees using COVID-related leave.

[v] The PBO’s estimate in the first report (published on July 24, 2020) only accounted for salary at and average cost of $309 per employee per day. The average cost across government inclusive of pension, benefits, and other personnel costs is $481 per employee per day and was used to estimate costs in the updates published on August 24 and December 1, 2020, as well as in this update. Per-department costs were used in the estimate whenever possible. The CRA has lower than average per-employee costs which decreased the overall average cost.

[vii] The breakdown data for the month of March is scarcer, which is not surprising given the fact that even the CRA had not implemented these types of 699 leave codes in its time tracking system until the first week of April. It is not clear however, how federal organizations were able to identify these hours retroactively, given that we were told in July that only two departments had the system capabilities to provide such a breakdown.