The cost differential between three regimes of Veterans Benefits - Update: Get the code

Get the report
The cost differential between three regimes of Veterans Benefits.pdf

Summary
Several parliamentarians requested that the Parliamentary Budget Officer (PBO) prepare an estimate of the fiscal cost of each of these regimes over the medium term.

Using data from Veterans Affairs Canada, PBO estimated the overall fiscal costs to the government on a net present value (NPV) basis for the existing cohort of beneficiaries and for projected new beneficiaries during the period 2019-2023.

PBO found that the Pension Act regime is the most generous for the veterans and the most expensive for the federal government. The Pension for Life regime is slightly more generous than the Veterans Well-being Act regime. 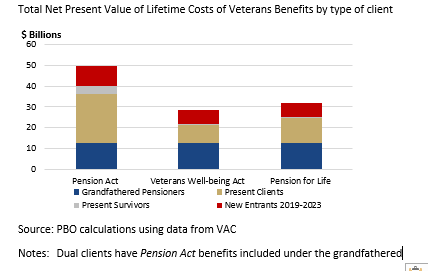 Most, but not all, veterans will be financially better off under the new Pension for Life regime compared to the existing Veterans Well-being Act.

While all current recipients of disability benefits will receive an equal or greater amount with the new regime, PBO estimates that about 5 per cent of future recipients would have been better off under the Veterans Well-being Act. Moreover, 3 per cent of new entrants would be greatly disadvantaged under Pension for Life as they would, on average, have received around $300 thousand more in financial support from the existing regime.

This is in part related to the elimination of the Career Impact Allowance Supplement (CIAS), which is offered to veterans with severe and permanent impairment and diminished earning capacities.