Closing the gap: carbon pricing for the Paris target.pdf

This report provides an estimate of the additional carbon price that would be needed to achieve Canada’s greenhouse gas (GHG) emissions target in 2030 under the Paris Agreement, as well as an estimate of the corresponding impact on the Canadian economy.

The scope of this report is limited. For instance, the report does not assess the policy merits of carbon pricing or alternative approaches to reducing GHG emissions; nor does the report attempt to account for the economic and environmental costs of climate change.

The Paris Agreement builds upon the United Nations Framework Convention on Climate Change (UNFCCC). Under the Paris Agreement, Canada has committed to reduce its GHG emissions by 30 per cent below 2005 levels by 2030, to a level of 513 megatonnes (Mt) of CO2 equivalent (Summary Figure 1).1 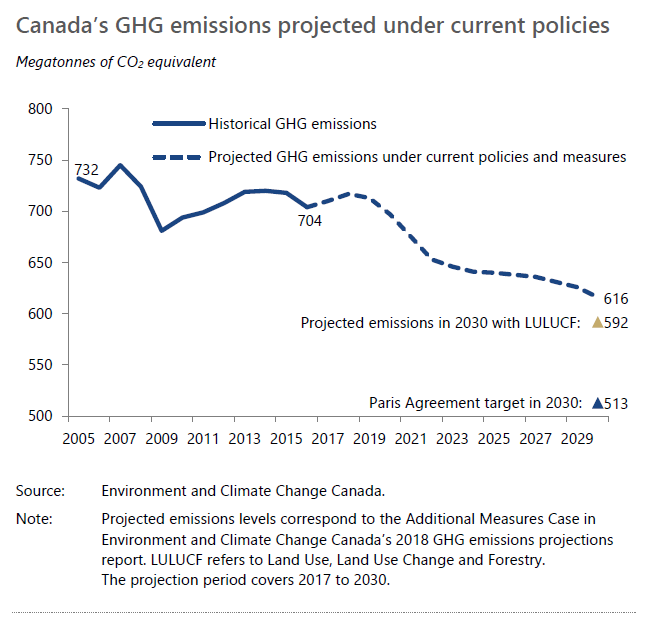 Under current policies and measures that have been announced, but are not yet fully implemented, Environment and Climate Change Canada (ECCC) projects that Canada’s GHG emissions will decrease from 704 Mt in 2016 to 616 Mt in 2030. Current policies and measures include the federal carbon pricing system under which the fuel charge rises to $50 per tonne of CO2 equivalent in 2022.

Accounting for the contribution of the Land Use, Land Use Change and Forestry (LULUCF) sector lowers Canada’s projected GHG emissions to 592 Mt in 2030.

Using the computable general equilibrium (CGE) model ENVISAGE, we estimate the additional carbon price that would be needed to reduce Canada’s GHG emissions by a further 79 Mt in 2030, closing the gap between the Paris target and baseline emissions projected under current policies and measures.

Similar to the federal fuel charge under the Pan-Canadian Framework, we assume that revenues from additional carbon pricing are returned to households in lump-sum payments.

To put our estimates in context, we compare them to ECCC’s fall 2018 estimates of the impacts of carbon pricing over 2018 to 2022 (Summary Figure 2). 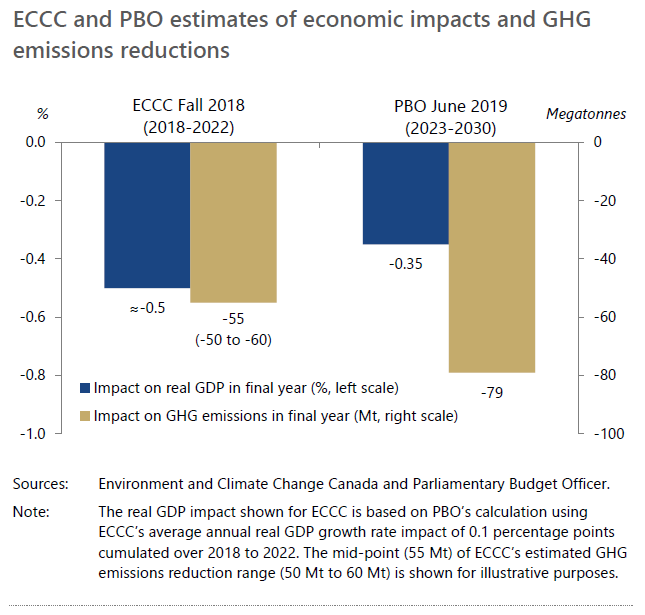 ECCC’s fall 2018 analysis finds that carbon pricing would reduce GHG emissions by 50 Mt to 60 Mt in 2022 with the federal fuel charge rising to $50 per tonne in 2022, in addition to including other current federal, provincial and territorial policies. ECCC estimates that achieving this reduction in GHG emissions would lower Canada’s average annual real GDP growth by about 0.1 percentage points over 2018 to 2022. PBO calculates that this would translate into an impact of approximately  0.5 per cent on the level of real GDP in 2022.

PBO’s analysis uses a carbon tax as the policy instrument to achieve the Paris target. Nonetheless, any number of policies could be introduced to close the GHG emissions gap, all of which would impose either an explicit price on carbon (a levy/fuel charge or a cap-and-trade system), or a hidden price on the cost of goods and services (regulatory measures or subsidies).