This note responds to additional questions raised by parliamentarians following the release of our report.  To ensure equal dissemination, we decided to incorporate our responses in this posting.

Specifically, we examine the current operating results of the existing Trans Mountain Pipeline system; the inclusion of capital gains tax revenue in the assets’ valuation; an alternate specification for the fiscal sensitivity of construction delays; and, the certainty of shipper contracts.

The Government of Canada reports current operating results from the existing pipeline system and related infrastructure as part of the Canada Development Investment Corporation’s (CDEV’s) quarterly and annual financial reports.

As noted during our briefing, the Government has only reported one month of results (Table 1).  According to CDEV, operating revenues were $33 million, arising primarily from transportation tolls.  Operating expenses were reported to be $17 million.

CDEV’s 2018 Third Quarter Report indicates that the pipeline purchase was financed through a $5.2 billion loan from Export Development Canada at a 4.7 per cent interest rate.  Reported interest expenses for the one-month period were $21 million.

It is unclear whether this single month of data is representative of ongoing results.  As such, PBO will continue to monitor CDEV’s financial reports.

Inclusion of the Capital Gains Tax Revenue in the Valuation

PBO believes that the estimated $325 million in capital gains tax revenue on the sale of the Trans Mountain assets should not be included as part of the value of the assets.

Tables 2 and 3 provide supplementary sensitivity analysis on the impact of different discount rates (Table 2), construction costs (Table 3), and in-service dates (both Tables) on the value of the Trans Mountain Expansion Project (TMEP).

Tables 2 and 3 assume later in-service dates are due to delays in the initiation of construction activities. 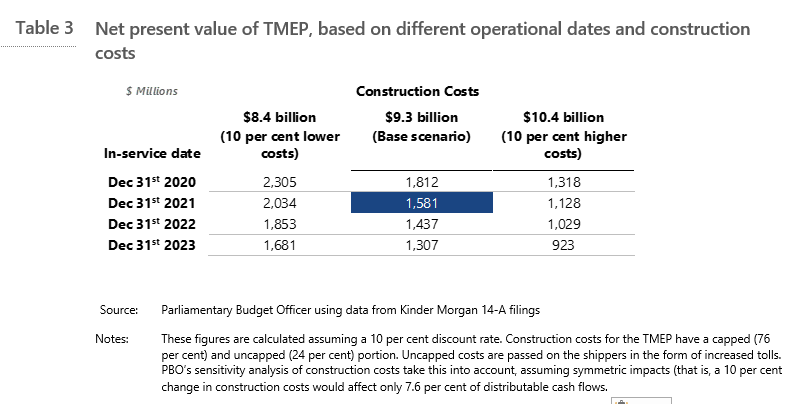 PBO’s revenue projections for the TMEP are predicated on 80 per cent of the capacity being committed – that is, shippers are contractually obligated to ship their committed volume of petroleum, or else pay for that capacity if shippers do not use it.  However, NEB filings specify that shippers have the right to terminate their contracts if construction costs rise above a certain expected amount, specifically if the Certificate of Public Convenience and Necessity (CPCN) Cost Estimate and subsequent Revised Toll exceed the Initial Cost Estimate by approximately $1.4 billion.[i]

It is yet to be determined whether construction costs will rise above the threshold at which shippers could terminate their contracts.  PBO will continue to monitor NEB filings on costs and contracted capacity.