The third Supplementary Estimates for the 2015-16 fiscal year outline $5.1 billion of additional budgetary spending. This brings total planned budgetary spending for the year to $251 billion, 3.7 per cent higher than the previous year.

Voted appropriations include a $435 million top up of the long-term disability insurance for members of the Canadian Armed Forces. The Government also wrote off $176 million in defaulted student loans and provided a $168 million grant to the Green Climate Fund.

Statutory spending increases stem from a $4.8 billion increase in Universal Child Care Benefit payments, which are partially offset by $2.6 billion of savings from lower interest payments on public debt.

Lastly, for the first time, these Supplementary Estimates (C) publish details regarding $5.1 billion of unspent funds, of which $1.8 billion are Treasury Board Central Votes, and $3.3 billion are frozen allotments. Frozen allotments are moneys approved by Parliament but held in escrow by the Treasury Board. Since 2004-05, frozen allotments have, on average, represented roughly two-fifths of annual “lapsed” funding. If the pattern from previous years holds, this would imply a total lapse higher than the Government projected in Budget 2015.  This would potentially result in lower than anticipated Direct Program Expenses. 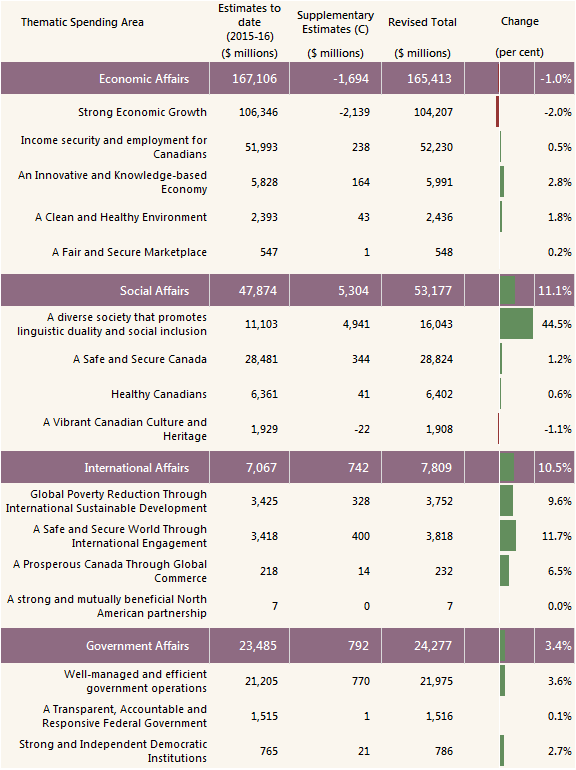