Get the report
Supplementary Estimates (A) 2016-17.pdf

The first Supplementary Estimates for the 2016-17 fiscal year outline $1.3 billion in additional net budgetary spending. The Estimates request $7.0 billion from Parliament in “voted” authorities (the largest such amount in a decade), and partially offset that with a decrease of $5.7 billion in “statutory” authorities related to the cessation of the Universal Child Care Benefit (UCCB).

These Supplementary Estimates are historically large because, for the first time since the 2007 renewal of the EMS, the Government has incorporated a significant number of new measures from the recent Budget.  As was originally intended almost one decade ago, presenting a “Budget implementation” supplementary estimates will ensure parliamentarians are more easily able to scrutinize major legislative aspects of Budget 2016 in concert (this includes Bills C-2 and C-15, currently before the Senate and House of Commons, respectively).

These Estimates have also returned to the practice of providing a reconciliation tables between the Estimates and the Budget, granting Parliament with additional ability to provide scrutiny to the Government’s finances.

The PBO is encouraged by the Government’s continued progress on addressing the recommendations for Estimates renewal presented in the Seventh Report of the House of Commons Standing Committee on Government Operations and Estimates.

The majority of the new funds requested in these Supplementary Estimates relate to infrastructure pledges outlined in Budget 2016. Of the $7.0 billion requested in voted authorities, $3.9 billion is devoted to infrastructure spending. Largest amongst these is $1.4 billion for the Office of Infrastructure of Canada to set up funds for public transit and wastewater infrastructure, and $1.1 billion for Canada Mortgage and Housing Corporation to address indigenous and low-income housing needs. Both are classified under Economic Affairs in the Whole of Government framework.

Social Affairs will receive the largest decrease in spending, (9.2 per cent, $4.8 billion), mostly as result of the cessation of the UCCB and its replacement with the new Child Care Benefit (CCB) as outlined in Budget 2016. As the CCB is administered through the tax system, this spending is not reflected in the Estimates. 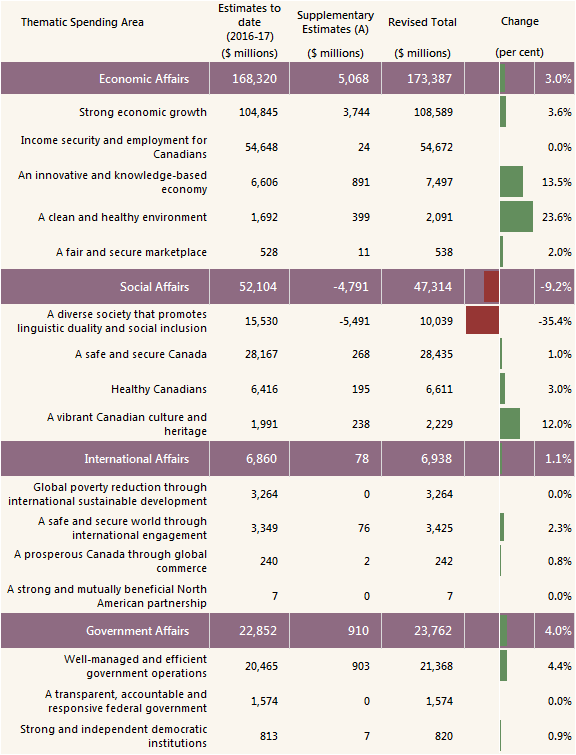