Get the report
Revisiting the Middle Class Tax Cut.pdf

Summary
This report provides ex post (after the fact) estimates of the fiscal impact of the middle class tax cut in tax years 2015 and 2016. The estimates are based on counterfactual scenarios that are compared to recent historical data from the Canada Revenue Agency. The fiscal impact estimates also account for the effects of income forestalling and unwinding.

Because the new tax rate on incomes greater than $200,000 was announced before the end of the 2015 tax year, some high-income individuals had time to shift income forward, or forestall, to take advantage of the lower 2015 tax rate. In subsequent years, this advanced income would be unwound.

For the tax year 2015, we estimate the total fiscal impact at $5.6 billion. That is, federal PIT revenues were $5.6 billion higher compared to a scenario without the announced increase in the top rate. This is due to high-income individuals bringing forward income that would have been taxed in future years at a higher PIT rate.

Under the assumption of no behavioural changes, the revenue loss to the Government from reducing the second PIT rate to 20.5 per cent ($3.5 billion) exceeds the revenue gain from introducing the new top rate of 33.0 per cent ($3.0 billion).

The behavioural fiscal impact in 2016 reflects the unwinding of some taxable income brought forward in 2015 by high-income individuals (-$4.0 billion) that is partially offset by higher revenues from middle-income individuals consistent with an increase in their labour supply ($0.8 billion). 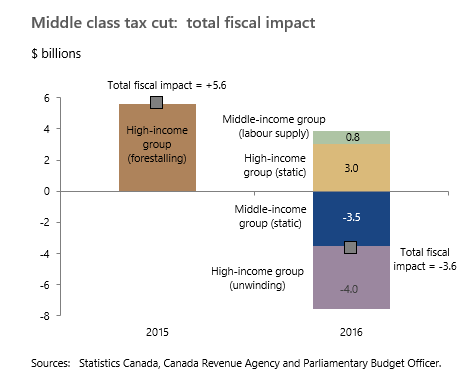 Based on our counterfactual scenario and what appears to be a reasonable unwinding assumption, our baseline result suggests that individuals in the high-income group did not reduce their labour supply in response to the new 33.0 per cent top PIT rate.

Implicit estimates of the short-run elasticity of taxable income

For individuals with taxable incomes of between $45,282 and $90,563, our results are consistent with a short-run elasticity of taxable income (ETI) of 0.47. This is higher than the ETI for this group (of 0.10) that was assumed in PBO’s 2016 report. It suggests that middle-income individuals reacted more to the reduction in the second PIT rate in 2016 than we had assumed. The magnitude of our implicit ETI estimate for the middle-income group is largely supported by previous studies.

After adjusting for unwinding, our baseline result for the high-income group is consistent with a short-run ETI equal to 0, which suggests that these individuals did not reduce their labour supply in response to a higher marginal tax rate. This stands in contrast to the ETI (of 0.38) for the high-income group assumed in PBO’s 2016 report, as well as estimates in previous studies. Many of these studies also did not control for the effects of forestalling/unwinding in their estimation.

We do consider some alternative assumptions related to unwinding and counterfactual taxable income growth. Nonetheless, our implicit ETI estimates for the high-income group in 2016 fall near the lower bound of the range of estimates in previous studies.