Status Report on Phase 1 of the Investing in Canada Plan

Get the data
Provincial Capital Spending 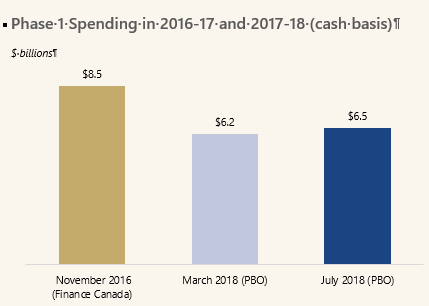 At the request of the Senate National Finance Committee, the Parliamentary Budget Office (PBO) sent information requests to the 11 federal departments and agencies responsible for implementing the $14.4 billion Phase I of the Investing In Canada Plan (IICP). Federal organizations responded in June and July 2018, identifying total planned spending of $13.7 billion over 8 years.

The gap between the original budget and current planned spending is partially attributable to a recent federal decision to transfer $0.2 billion in spending from Phase I to Phase II of the IICP. It is also due to incomplete reporting by some federal departments (Indigenous Services Canada and Crown-Indigenous Relations and Northern Affairs).

Consistent with our previous findings, federal spending on infrastructure continues to be delayed compared to the original Budget 2016 timeline. In March 2018, PBO estimated that planned spending in the first two years of the Phase I IICP would total $6.2 billion; the current figure is $6.5 billion.