Summary
Overall, PBO finds that most labour market indicators remain fairly close to their trend levels, except for average hours worked which is below trend. We estimate that weakness in hours worked, reflecting the rise in part time employment, was responsible for roughly half of the economy’s underperformance relative to potential GDP as of Q3 2016. All of the job gains from Q3 2015 to Q3 2016 were entirely part time as full time employment contracted.

Our analysis suggests that, at the national level, the labour market is currently operating below its sustainable capacity as the demographic transition takes hold. While the Canadian economy created 96,000 (net) jobs – or 8,000 per month on average – from Q3 2015 to Q3 2016, this is half the average rate of job creation of the previous five years. PBO’s labour trend modelling suggests that this slowdown in employment growth is consistent with the ageing of Canada’s workforce.  We project that the Canadian economy will create about 8,000 (net) jobs per month on average over 2016 to 2019 as population ageing is offset somewhat by cyclical improvements in the economy.  We then project job gains to slow to less than 4,000 per month from 2020 to 2025 as boomer cohorts continue to transition out of the labour force. 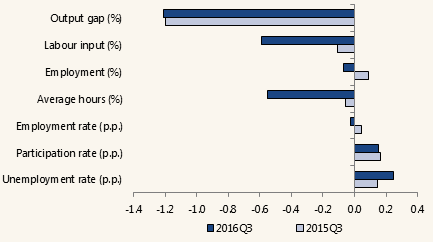 Relative to Q3 2015, indicators have improved in British Columbia, Ontario and Quebec.  Service sector employment has experienced the strongest job growth. By contrast, indicators have worsened in the Prairie Provinces, notably Alberta, and in oil and gas extraction industries.  Some of this impact could prove temporary owing to the wildfires in Fort McMurray; however, the weaknesses in this region and sector predate Q2 2016.  Despite the depreciation in the Canadian dollar, manufacturing employment fell by 20,000 from Q3 2015 to Q3 2016.