Summary
On July 18, 2017, the Minister of Finance announced consultations on tax planning strategies involving the use of private corporations. These consultations included proposed extensions to rules governing the tax on split income (TOSI) aimed at limiting income sprinkling opportunities.

Income sprinkling, also known as income splitting, refers to the ability of a high-income owner of a Canadian-controlled private corporation (CCPC) to arrange the ownership structure of the corporation in order to distribute some of its profits to family members in lower tax brackets. This would reduce the family’s overall tax liability.

On December 13, 2017, the Minister published proposals to simplify the treatment of income sprinkling.  He presented specific situations in which dividends paid to family members would not be considered as sprinkling income. Thus, they would not be affected by the extended TOSI rules. He also provided thresholds in terms of labour and capital contributions. Budget 2018 confirmed the application of the new rules as laid out in the December 2017 proposal. These new rules have come into effect January 1st, 2018.

This report analyzes the proposed changes to address income sprinkling. The Parliamentary Budget Officer (PBO) was unable to clearly identify the individuals who will be subject to the TOSI rules. Consequently, the PBO computed possible revenue outcomes for the government based on three different scenarios.

Scenario 1 presents our preferred estimate, while scenarios 2 and 3 offer possible lower and upper limits for the revenue estimate.

In all three scenarios, we considered dividends paid to adult family members as not being subject to the TOSI, for individuals where:

In this scenario, we also excluded all the spouses aged 25 or over from being subject to the new TOSI rules. The rationale behind this scenario is that it is likely that most spouses have assumed some risk in the family business (for example, using the house as collateral for a bank loan to start the business). Therefore, we assume they would pass the reasonableness test and see the dividends they received as being exempt from the TOSI. This is our preferred scenario.

This scenario is similar to scenario 1. However, we also excluded all children aged 25 and over from being subject to the new TOSI rules. Thus, we assume they have provided some level of labour and/or capital contribution that would be sufficient to pass the reasonableness test.

This scenario is also similar to scenario 1, but we exclude only spouses of primary business owners outside the professional sector. The rationale is that in some professions, it is possible that the spouse is not assuming risk with respect to the business.

Table S-1 presents our estimates of the change to federal and provincial tax revenues under these three scenarios for fiscal year 2018-2019.

As is expected, scenario 3 generates the highest increase in revenues, and scenario 2 the lowest. We expect the actual value would lie closer to the result of scenario 1, but it could end up between the results of scenarios 2 and 3.

Under scenario 1, PBO’s preferred scenario, the new policy changes would result in an estimated $589-million increase in taxation revenues, $356 million or 60 per cent of which would go to the federal government. Families in Ontario would pay $224 million more in federal taxes, close to 63 per cent of the total.  More than 95 per cent of additional federal tax payable would come from families with family taxable income above $150,000. 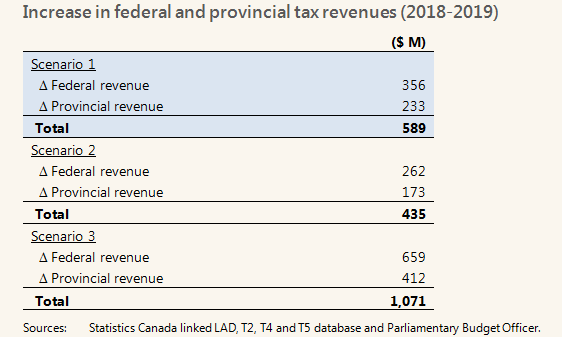 Table S-2 presents a comparison of our five-year revenue profile of scenario 1 (our preferred estimate) with the profile presented by Finance Canada in its 2018 Budget.

PBO’s revenue profile is, on average, $186 million (90 per cent) higher per year, than Finance Canada’s estimate.

Overall, we have identified about 33,000 families who could be impacted by the Government’s measures to restrict income sprinkling.  In general, these families are likely to have a household taxable income of more than $150,000 and have a male controlling owner. They would also likely reside in Ontario or Alberta, and in an urban area with a population of more than 100,000 (Table S-3). 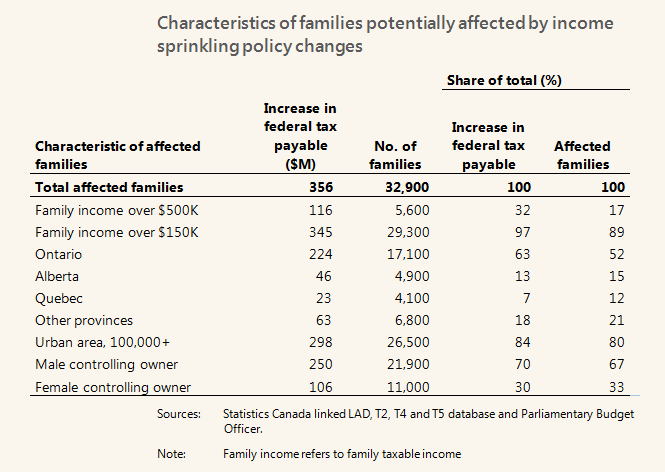