Household Formation and the Housing Stock: A Stock-Flow Perspective

Get the report
Household Formation and the Housing Stock.pdf

Summary
Key points
This report provides estimates of household formation and the housing stock in Canada, and also attempts to gauge the degree of balance in the housing sector, both for new housing units and for the overall housing stock. Our assessment, however, is based on housing data and indicators at the national level, which can mask important variation across regions. An assessment of the housing sector at the regional, or Census Metropolitan Area (CMA), is beyond the scope of our report.

•              While the reversal of this trend helped reduce the national vacancy rate from elevated levels, we estimate that there was still some excess supply in terms of the overall stock of housing units in 2015.

•              PBO’s October 2016 outlook incorporates a significant adjustment in the share of residential investment in the economy that is driven by a pullback in housing construction activity.

•              The projected weakness in PBO’s outlook for residential investment largely reflects rising borrowing rates and a deceleration in house prices.

•              Based on PBO’s October 2016 outlook, we project that the housing stock will return to balance over the medium term as the national vacancy rate converges to its long-term historical average.

Context
The share of residential investment in the Canadian economy reached a record high of 7.7 per cent of gross domestic product (GDP) in the second quarter of 2016. In its 2016 Economic Survey, the Organization for Economic Co-operation and Development (OECD) noted that the share of residential investment in Canada’s GDP was the highest among OECD countries and that “it appears stronger than what can be justified by underlying population increases”.

While the share of residential investment in the economy serves as a useful indicator of housing market activity, assessing imbalances—in terms of housing units as opposed to prices—in this sector requires taking a broader perspective. This report examines the housing sector from a stock-flow perspective. That is, we examine the “flow” of residential construction relative to its fundamental driver, household formation, as well as in the context of the overall “stock” of occupied and vacant housing units.

Unfortunately, there are shortcomings in terms of the availability of official housing data. As noted in IMF staff analysis, housing stock series published by Statistics Canada were discontinued in 2000. Further, estimates of households and dwellings are only available every five years with the Census. To address these shortcomings, we construct annual estimates of the number of households over 1971 to 2015 and the housing stock beyond 2000.

We adopt the Census definition of a household, which is defined as a person or a group of persons (other than foreign residents) who occupy a private dwelling and do not have a usual place of residence elsewhere in Canada. Household formation is the net change in the number of households. 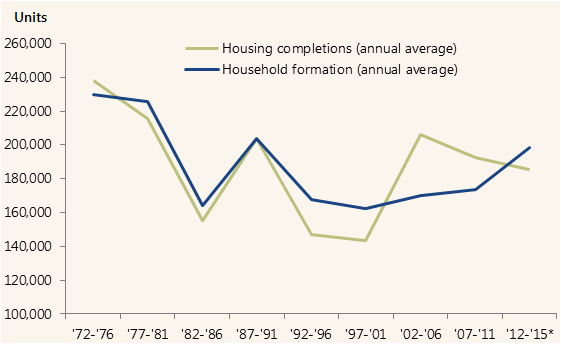 Based on our estimate of the number of households in 2015, household formation outpaced the construction of new housing units over 2012 to 2015, reversing the trend observed since 2001.

The housing stock and vacancy rate
Assessing housing completions relative to household formation helps to gauge “flow” imbalances, whereas taking into account the total vacancy rate (that is, the number of vacant units for sale and rent relative to the overall housing stock) provides a “stock” perspective.

Summary Figure 2 shows that, nationally, the total vacancy rate remained elevated in the aftermath of the global financial crisis as housing construction moderated and moved into line with household formation over 2009 to 2011. In 2012, the vacancy rate began to decline sharply, returning close to its long-term historical average of 5.0 per cent, as housing construction remained subdued while the pace of household formation picked up. 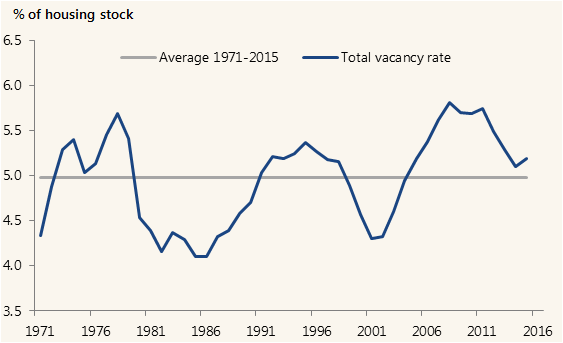 Relative to its long-term historical average, our estimate of the vacancy rate in 2015 (5.2 per cent) suggests that there was still some excess supply in the housing sector at the national level. Thus, while data and our estimates suggest that there was an imbalance between the flows of household formation and housing completions over 2012 to 2015, this helped reduce the excess supply in the overall housing stock.

Medium-term prospects
Based on PBO’s October 2016 Economic and Fiscal Outlook (EFO), the share of residential investment in the Canadian economy is projected to fall from 7.7 per cent of GDP in 2016 to 6.5 per cent of GDP in 2020 (Summary Figure 3). The projected decline primarily reflects weaker residential investment volumes, owing to rising borrowing rates and a deceleration in house prices.

Residential investment in the Canadian economy 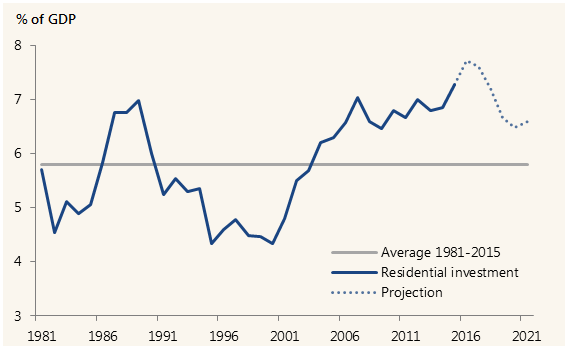 We project that the total vacancy rate will remain close to 5.2 per cent through 2018 as net additions to the housing stock track household formation. However, as residential construction activity weakens further in 2019 and 2020, the total vacancy rate decreases—even as household formation moderates—converging to its long-term historical average of 5.0 per cent by 2021.

Thus, based on PBO’s October 2016 outlook, we project that the housing stock will return to balance over the medium term.