Get the report
Household Indebtedness and Financial Vulnerability – Recent Developments and Outlook.pdf

Summary
This report reviews recent developments in household finances and assesses prospects for financial vulnerability over the medium term based on PBO’s April 2017 Economic and Fiscal Outlook. The assessment, however, is based on financial indicators that represent economy-wide averages, which can mask wide variation across households.

What matters more for financial vulnerability is not so much the level of the debt relative to income, but rather the capacity of households to service their debt. Financial vulnerability is typically measured by the debt service ratio (DSR), that is, household debt payments expressed relative to disposable income. In this report, we adopt Statistics Canada’s DSR measure, which includes required principal and interest payments, but excludes debt prepayments. Statistics Canada also publishes an “interest-only” DSR.

Household debt-servicing capacity will become stretched even further as interest rates rise to more “normal” levels over the next five years. Based on PBO’s projection, the financial vulnerability of the average Canadian household would rise to levels beyond historical experience. 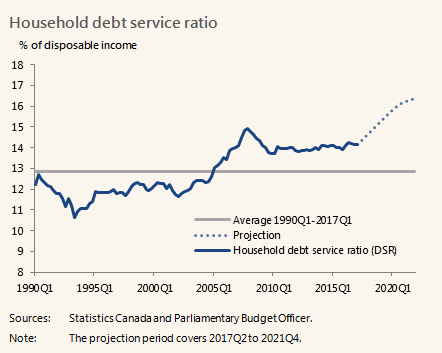