Get the report
Federal Spending on Primary and Secondary Education on First Nations Reserves.pdf 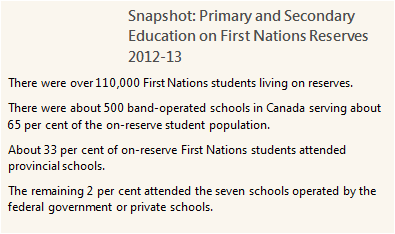 Summary
In Canada, education is largely a provincial domain. The notable exception is education for First Nations students living on reserve. This responsibility falls squarely with the Minister of Indigenous and Northern Affairs (INAC).  After comparing and analyzing data on federal and provincial education spending, PBO found evidence that INAC funding mechanisms:

The funding shortfall – the difference between INAC funding and funding that would occur under the provincial formula -- is the result of INAC not adequately costing for operating small schools in remote northern regions. In addition, band schools face higher costs because of higher incidence of socio-economic disadvantage; commitments to provide culturally relevant instruction in indigenous languages; and large numbers of students for whom English or French is a second language. The incidence of children requiring special education support is also higher.

PBO estimates that in the medium term, new investments in education program spending announced in Budget 2016 could begin to address funding shortfalls for band-operated schools.

PBO estimates that over the medium term, new budget announcements for capital spending have the potential to address capital shortfalls, but only if the historical trend of lapsing significant amounts of capital funding is addressed.

Some Background
In 2014-15, spending on K-12 education programs exceeded $1.72 billion, representing roughly 22 per cent of INACs budget and 0.61 per cent of total federal spending.  Program spending supports instructional services in on-reserve schools, reimbursement of tuition costs for students who attend off-reserve provincial schools, and other services such as transportation, and financial assistance. Capital spending (or money used to build schools) was about $150 million.

INAC provides funding for education through a combination of Core and Proposal based mechanisms.

Core funding is used to pay instructional services for band-operated schools and tuition fees for students attending provincial schools. Core funding is allocated based on the previous year’s allocation with an increase based on an annual escalator.  Between 1996 and 2016, a 2 per cent cap on annual increases was in place. Between 2004 and 2016, growth in INAC`s education spending did not keep pace with that of the Provinces. Proposal-based funding supports defined, often time-limited projects, as well as students with high-cost special education needs. In contrast, Provinces use funding formulas to allocate resources to school boards. Provincial education funding formulas take into account important cost drivers and provide a foundation for education funding that is stable, predictable and transparent. 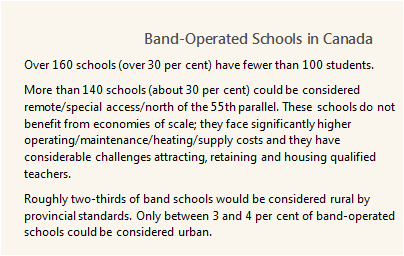