Get the report
Federal Personnel Spending: Past and future trends.pdf

Summary
Personnel expenses represent a large cost for government, accounting for 40 per cent of direct program spending. These expenses are a complex item to scrutinize; they include not only salaries paid to personnel today, but benefits for which cash payments, such as pensions, will be made well into the future.

Because of the sheer size and complexity of personnel spending, changes both within and outside Parliament’s control have had sizable impacts on the federal budgetary balance.

Current cash personnel costs have been relatively stable since 2005-2006. These costs are under the direct control of the Government, generally growing as the number of federal personnel and salaries increase. Current cash spending represents 90 per cent of personnel spending. Yet it accounts for only half of the growth of $20 billion in total personnel spending between 2005-2006 and 2016-2017. The remaining half was due to increases in the cost of future benefits.

PBO projects that total personnel spending will decline from $51.1 billion in 2017 2018 to $46.4 billion by 2022-2023. Policy changes aside, past cost pressures posed by future benefits should soon reverse course as interest rates rise in the future. (Interest rates and future benefits expenses are inversely related.) We project an $8.5-billion decline in the cost of future benefits from 2017-2018 to 2022-2023. We also project near-zero growth in the number of federal employees. 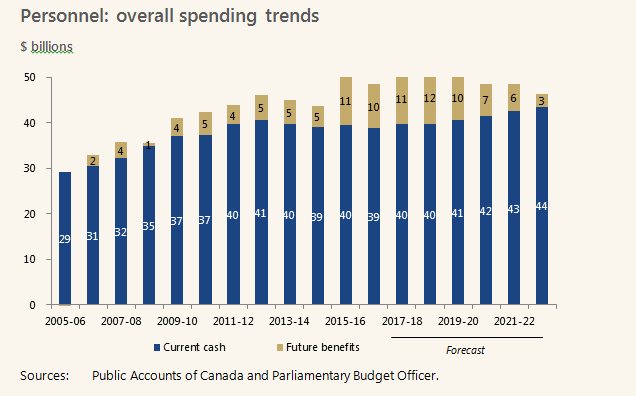