Fiscal sustainability means that government debt does not grow continuously as a share of the economy. The goal is to identify if policy changes are required to avoid unsustainable public debt accumulation, after considering the economic and fiscal impacts of population ageing.

Government sector net debt over the long term
% of GDP 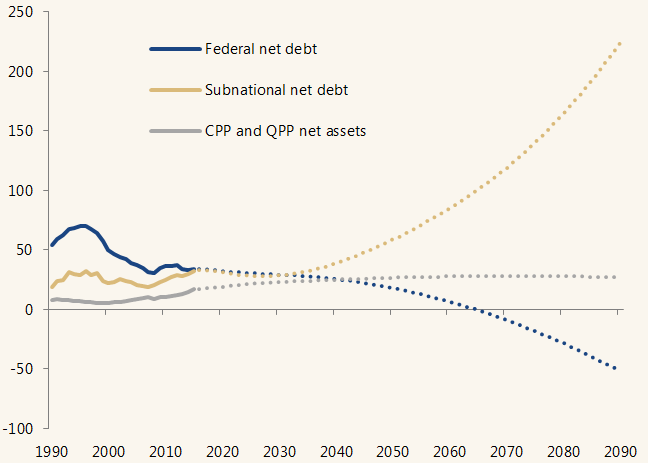 PBO’s 2015 Fiscal Sustainability Report concluded that the federal government had room to increase spending or reduce taxes. Measures in Budget 2016 have reduced this room. However, the government continues to have flexibility to expand policy while maintaining fiscal sustainability.

To maintain net debt at its current level of 33.7 per cent of gross domestic product (GDP) over the long term, PBO estimates that the federal government could permanently increase spending or reduce taxes by 0.9 per cent of GDP ($19.2 billion in current dollars). This is down from 1.4 per cent in last year’s assessment.

The outlook for subnational governments (that is, combined provincial, territorial, local and Aboriginal governments) is little changed from last year’s assessment. Permanent policy actions amounting to 1.5 per cent of GDP ($30.2 billion in current dollars) would be required to stabilize the subnational government net debt-to-GDP ratio at its current level (32.5 per cent) over the long term. The required fiscal consolidation has increased marginally from 1.4 per cent in last year’s assessment.

The long-term projection of the Canada Pension Plan (CPP) does not incorporate the agreement in principle signed by Canada’s Finance Ministers on 20 June 2016. PBO will assess the changes to the CPP when further details on implementation are released.

The total general government sector in Canada (that is, the combined federal and subnational governments and public pension plans) is not fiscally sustainable without permanent increases in revenues or reductions of at least 0.6 percentage points of GDP.

Changes could be made at any level of government to eliminate the total government fiscal gap. However, ensuring the sustainability of each government sector on its own would require a consolidation at the subnational level and/or higher transfers from the federal government.