Summary
Government expenditures for the first nine months of 2015-16 were $187.7 billion, an increase of 4.8 per cent over the same period last year ($179.1 billion). This increase results from increased transfer payments for the unemployed and higher capital spending.

Employment Insurance (EI) benefits increased almost $1 billion (7.4 per cent) over the same period in 2014-15. According to Statistics Canada, the number of EI beneficiaries increased by 35,900 (7.1 per cent) between January 2015 and January 2016, largely attributable to increases in Alberta, and other energy dependent regions.  Concomitant with this, the national unemployment rate has risen to a three year high of 7.3 per cent in February.

Growth in capital spending is consistent with the $393 million in federal infrastructure investment promised in Budget 2015 for 2015-16. Budget 2016 also committed to spending a further $3.4 billion on federal assets over the next five years.

Overall, the spending pattern in this fiscal year is similar to the previous two fiscal years. PBO estimates that the Government will lapse $8.8 billion, including frozen allotments. This is higher than the most recent Department of Finance projection of $6.5 billion. 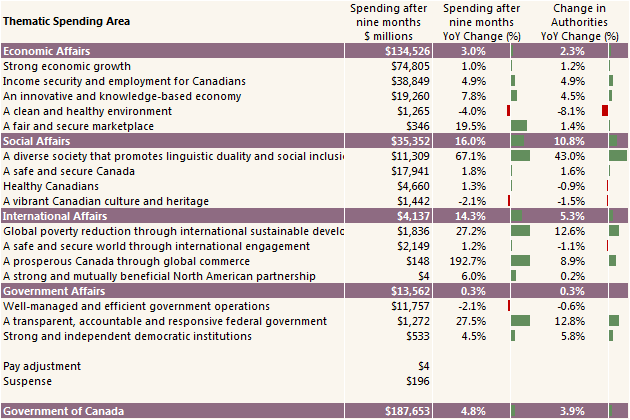