Get the report
Economic and Fiscal Outlook – October 2017.pdf

Summary
The Canadian economy advanced at a robust pace in the first half of 2017. However, beginning in the second half, we project that growth in consumer spending will moderate and residential investment will continue to decline as borrowing rates rise and disposable income gains diminish.

Compared to our April outlook, the projected level of nominal GDP is, on average, only $2 billion (0.1 per cent) lower per year over 2017 to 2022, with downward revisions to GDP price levels offsetting upward revisions to real GDP.

The budgetary deficit in 2016-17 was $17.8 billion (0.9 per cent of GDP). This is $3.0 billion lower than we projected in April, reflecting lower-than-expected direct program expenses due, in part, to an estimated $1.8 billion in unspent infrastructure funding. 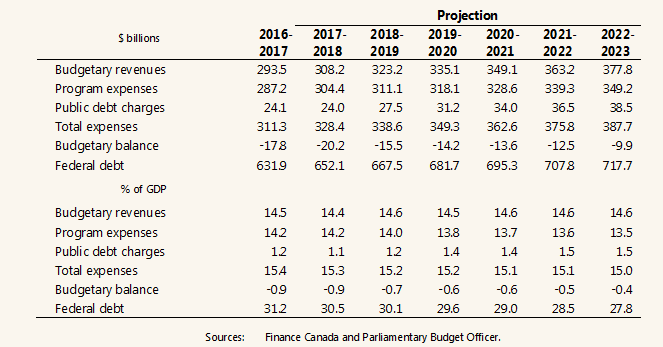 For the current fiscal year, 2017-18, we expect that the budgetary balance will show a deficit of $20.2 billion (0.9 per cent of GDP). We project that budgetary deficits will decline gradually, falling to $9.9 billion (0.4 per cent of GDP) in 2022-23. Lower direct program spending accounts for most of the reduction in the deficit over the projection horizon.

Our revenue outlook is marginally higher. Corporate income tax (CIT) revenues have remained strong through an extended period of weak corporate profitability, so we have adjusted upward our medium-term projection for CIT.

In Budget 2016, the Government committed to returning to balanced budgets and to reducing the federal debt to-GDP ratio to 31.0 per cent in 2020-21. Under current tax and spending plans, we project that the federal debt-to-GDP ratio will be 29.0 per cent in 2020-21, 2.0 percentage points of GDP below the target. As such, the Government has flexibility within its current fiscal plan to reach its medium-term debt-to-GDP target.