Get the report
Economic and Fiscal Outlook.pdf

Get the data
Economic and Fiscal Outlook.xlsx

Over the past six months, the outlook for the Canadian economy has deteriorated. The economy unexpectedly contracted in the first half of 2015. The IMF again marked down its outlook for the global economy. PBO’s outlook for oil and other commodity prices has been revised down and we now anticipate a larger adjustment in residential investment.

We have revised down nominal GDP—a broad measure of the government’s tax base—by $20 billion each year, on average, between 2015 and 2020 compared with our outlook provided to the House of Commons Standing Committee on Finance on 28 April 2015. The downward revision results from both lower real GDP levels and lower economy-wide prices.

We have provided an updated fiscal forecast that does not include the measures announced in the new government’s platform. The outlook is intended as a status quo planning assumption for the beginning of the 42nd Parliament. PBO will provide an updated outlook including measures proposed by the new government when further details are released during the new legislative session.

Under the status quo outlook, a weaker economy translates into larger deficits over the medium term than PBO forecast in April. 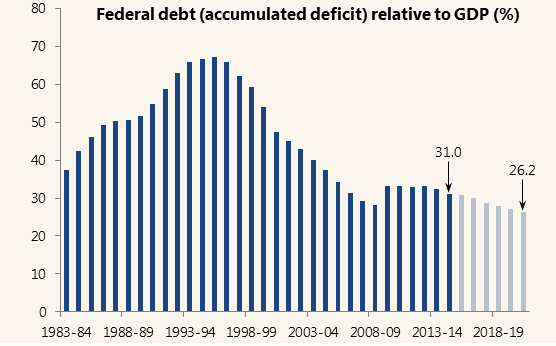 A note of clarification:  PBO also released a report in July that updated the government’s outlook presented in Budget 2015. Although this outlook showed surpluses for 2016-17 and 2017-18, it was not PBO’s own forecast—it was an estimate PBO prepared by request, and was based on Bank of Canada and Budget 2015 projections, using Budget 2015 fiscal sensitivities.