Get the report
Economic and Fiscal Monitor 2016-17.pdf

PBO estimates that Canadian real GDP advanced by 1.8 per cent (at an annual rate) in the fourth quarter. Compared to PBO’s October outlook, real GDP growth in the second half of 2016 is, on average, unchanged. For the year as a whole, PBO estimates that real GDP grew by 1.3 per cent in 2016, which is marginally higher than projected in our October outlook and the Government’s November Fall Economic Statement.

PBO estimates that nominal GDP—the broadest single measure of the tax base—in 2016 surpassed $2.0 trillion, which is modestly higher ($8.2 billion or 0.4 per cent) than projected in our October outlook and broadly in line ($4 billion or 0.2 per cent higher) with the Government’s Fall Economic Statement. This improvement reflects upward revisions to Statistics Canada’s estimates of domestic demand in the first half of 2016.

Compared to our October 2016 Economic and Fiscal Outlook, the Government’s budgetary balance for 2016-17 is expected to be slightly higher ($1.9 billion). Relative to the size of the Canadian economy, we estimate that the budgetary deficit for 2016-17 is 1.0 per cent of GDP. PBO’s estimate of the budgetary balance is $4.6 billion higher than the Government projected in its Fall Economic Statement. 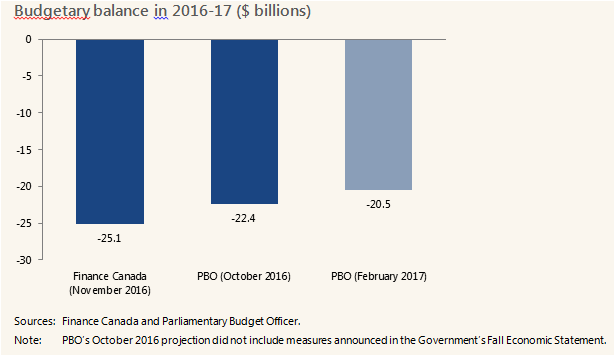 Based on fiscal data released up to the end of January and our estimates of nominal GDP, we expect revenues to be slightly higher ($0.9 billion) than projected in October. While personal income taxes (PIT), the largest single source of federal revenue, have lagged PBO projections, this has been offset by better-than-expected results from corporate income taxes and other revenues.

Expenses are slightly lower from our October projection (-$1.0 billion). Program expenses have been revised downward (-$0.5 billion), as have public debt charges (-$0.5 billion). 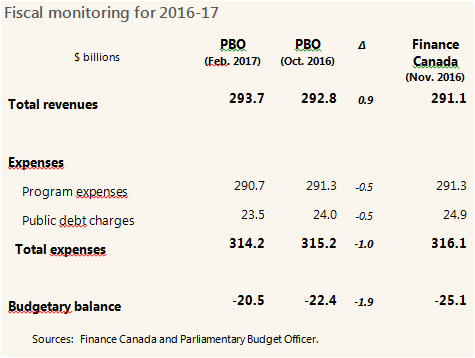 Program expenses for the first eight months of the fiscal year have been weaker than expected. As noted in PBO’s Expenditure Monitor, government expenditures for the first half of 2016-17 lagged the overall increase in planned budgeted spending, owing to delays in implementing the Government’s economic priorities, in particular new infrastructure investments.

PBO’s current monitoring reflects our expectation that the federal government will not spend all the money for housing and infrastructure investment as it originally anticipated. At the same time, a substantial amount of this spending is expected to be reported during the final four months of the fiscal year, with the balance in the subsequent year. This is consistent with provincial capital budgets and historical experience.