As shown in Summary Figure 1, over the past five years Disaster Financial Assistance Arrangements’ (DFAA) liabilities have increased substantially because of a number of weather events that have caused heavy damage. As a result, DFAA’s annual transfers to the provinces have been much higher than its nominal appropriation of $100 million (Summary Figure 2).

It is important to note that when a disaster occurs, DFAA in general books the liability in the year of the disaster recognizing its financial obligation. Yet, the actual transfers to the provinces for disasters can take place upwards of eight years after the event. This explains the large estimated transfers shown in Summary Figure 2 going out to fiscal year 2017-2018.

The results are listed in Summary Figure 3 below. It is important to stress that these values are averages; in any given year, the losses can be much higher or much lower. 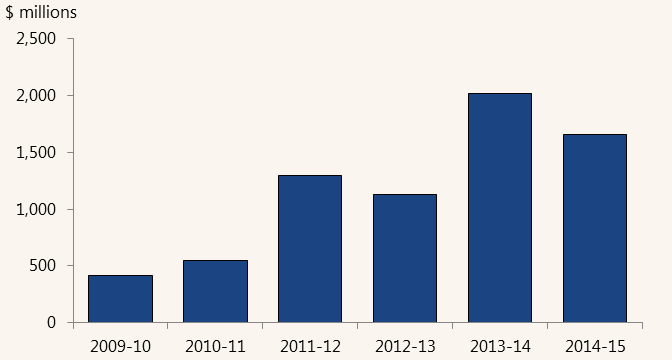 Summary Figure 2- DFAA estimated liabilities for claims not yet paid 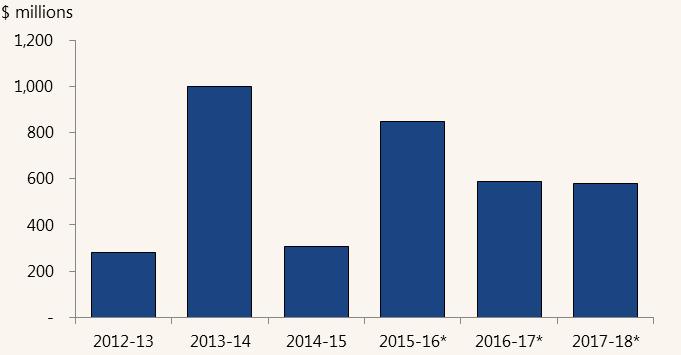 Summary Figure 3 also shows that the DFAA costs resulting from floods are the largest of the weather events at $673 million and represent 75 per cent of DFAA’s weather expenditures. This high proportion is partly due to the lack of privately available flood insurance, in Canada.  In addition, the program’s design does not incentivize active flood damage mitigation in many of the affected areas.  For example, over the past 10 years (2005-2014), Manitoba, Saskatchewan, and Alberta have accounted for 82 per cent of all DFAA weather event costs, almost all of which are a result of flooding, despite accounting for only 18% of Canada’s population.

The Prairie Provinces face regulatory challenges of reduced enforcement and compliance when floodplain management is the responsibility of municipalities. 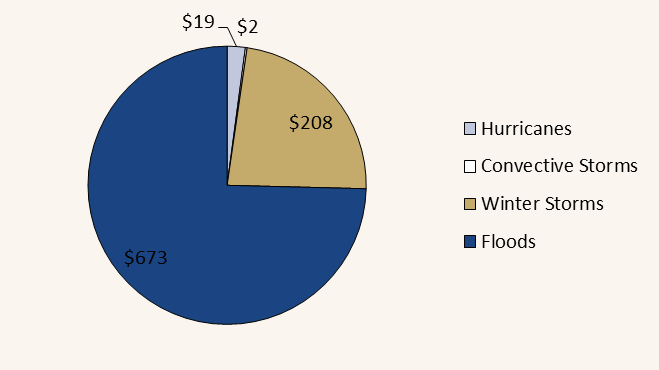 Furthermore, Saskatchewan has unlicensed drainage of wetlands that increases peak flows during floods and Alberta appears to have inaccurate flood maps.  Furthermore, in creating flood maps, Alberta does not take into account rising groundwater and debris floods on steep mountain creeks.

One last consideration is interprovincial co-ordination of flood management. This currently does not exist in Canada even though it has been shown to be effective at reducing damages in other countries.  This is particularly important in the Prairie Provinces where rivers such as the Saskatchewan and its tributaries span all three provinces.