Analysis of Changes to the Taxation of Corporate Passive Investment Income

Get the report
Analysis of Changes to the Taxation of Corporate Passive Investment Income.pdf

Summary
The Parliamentary Budget Officer (PBO) has estimated the potential fiscal magnitude of changes to passive income taxation based on the principles and preferred policy options outlined in Finance Canada’s July 18, 2017, consultation document and subsequent details announced in October.  Our estimate is based on the following changes to the current corporate tax system for Canadian Controlled Private Corporations (CCPCs):

1.       Refundable taxes on property income, portfolio dividends and capital gains would no longer be refundable where the source of funds for these investments benefited from low corporate tax rates;

2.       Capital gains dividends, which are currently distributed to shareholders tax‑free via the Capital Dividend Account, would now be taxed as dividends; and,

3.       Existing passive investment portfolios as defined by their nominal dollar value per firm[i] would not be affected by the changes. Rather, the policy changes would apply only to passive investment income on new investments exceeding an income threshold of $50,000.

Our analysis suggests that the proposed policy changes could take over 20 years to reach full maturity.  We estimate that about 47,000 (2.5 per cent) of CCPCs would be affected by these changes.

The primary revenue estimates in Summary Table 1 are subject to the following caveats:

·         They do not account for behavioural changes.  The incidence of these policy changes is concentrated on a relatively small percentage of large firms. The owners of these firms may change their tax strategies to minimize tax payments, which represents a downside risk to our estimates. Using an elasticity of 0.38, we estimate that behavioural impacts could reduce our primary revenue estimates in Summary Table 1 by 10 to 15 per cent (See Appendix A.4).

·         They are based on the 2014 tax reference year and adjusted up by about 10 per cent based on PBO’s estimated growth of the corporate tax base from 2014 to 2017. This implies slower growth in passive investment income than observed over 2010 to 2014; this represents an upside risk to our estimates.

The Government has not yet provided detailed legislation concerning the design and timing of this policy proposal. As a result, PBO made a number of assumptions regarding the policy design; these are detailed in Appendix A.

PBO estimates that provincial revenues would also increase as a result of these policy changes, but by a much smaller amount.  Overall, we estimate that 90 per cent of the revenue gains will accrue to the federal government, assuming no behavioural changes.

In terms of distribution, the impact of these changes is likely to be highly concentrated on a relatively small share of CCPCs, which hold the vast majority of passive investment assets. PBO found that in 2014, 2.5 per cent  CCPCs earned 88 per cent of all taxable passive income (Summary Table 2).

Furthermore, CCPCs with passive income above $1 million (which represent less than 0.1 per cent of all CCPCs) earned almost half of all taxable passive income.

Note:           Excludes firms that may not have benefitted from a tax deferral advantage.

We also find that 60 per cent of all passive income is earned by CCPCs with no active business income, suggesting they were set up solely for the purpose of generating passive income.

In terms of sectors, the following three sectors together earned close to 50 per cent of all taxable passive income:

They are also the three sectors with the highest share of corporations earning passive income above the proposed $50,000 threshold (Summary Table 3). CCPCs in the Management sector (NAICS code 55) are likely to be holding corporations, which again suggests they were set up for the purpose of generating passive income. 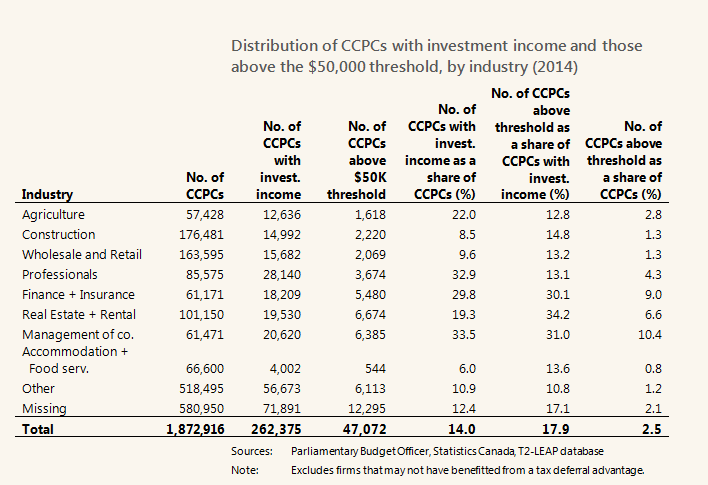 [i].      We use a firm’s retained earnings as a proxy for its passive investment asset portfolio.  As the new policy is phased in, the ratio of old vs. new retained earnings determines the amount of investment income subject to the new rules. There are pros and cons to this approach discussed in Annex A.