The Canada-EU Comprehensive Economic and Trade Agreement - A Prospective Analysis

Get the report
The Canada-EU Comprehensive Economic and Trade Agreement:  A Prospective Analysis.pdf

Summary
Bill C-30 was introduced in the House of Commons on October 31, 2016 to implement the Comprehensive Economic and Trade Agreement (CETA) between Canada and the European Union (EU).

The agreement is multi-faceted, but a primary focus is that for goods and services CETA eliminates (or lowers) a substantial number of tariff and non-tariff barriers. For some goods the effect may not be small. At the 6-digit nomenclature of Harmonised System of trade, on the order of 500 tariffs that are above 10 per cent are lowered or eliminated in both regions.

This report focuses on the parts of the agreement that can be studied analytically. On a weighted and un-weighted basis, Canada’s average tariffs toward the EU were higher than the EU’s toward Canada. Since Canada has higher tariffs on European goods, the agreement implies that Canada will be lowering its tariffs by more than the EU does on Canadian goods. This is similar to what occurred in the free trade agreement with the United States.

The impact of CETA can be summarized for the economic changes that it is projected to bring in major areas: trade in goods, trade in services, investment, GDP, and outflows of payments on pharmaceuticals. It is illustrative to consider the situation where the agreement had been in place for 2015 and the economy had fully responded to it. Exports would have been higher, as would investment and GDP. 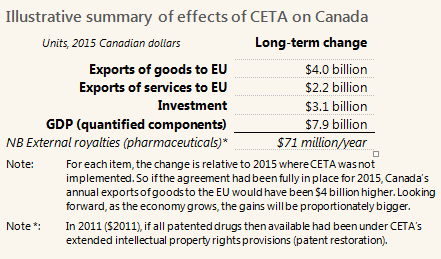 The gains are primarily the result of increased efficiency in the Canadian economy – through consolidation and expansion at a sectoral level (outlined in the report). So while there is an overall gain, there are some sectors that will be adversely affected.

The net gain in GDP for Canada comes in spite of a larger reduction in tariffs vis-à-vis the EU. This is consistent with the concept of comparative advantage (gains from trade) that underlies liberalized trade as a non-zero-sum proposition.