Canada Infrastructure Bank: Status of investments up to 2020-21 Q3

The Canada Infrastructure Bank (CIB) was established under the Canada Infrastructure Bank Act in 2017.  The CIB’s purpose is to invest in large, transformational and revenue generating projects that are in the public interest and developed and delivered in partnership with public, private and institutional investors.[1] By design, these investments would be allocated to projects where, absent of CIB involvement, no investment would occur.[2]

The $35 billion in start-up funding for the CIB is included under the Investing in Canada Plan (IICP) which has a total planned spending of $187.8 billion.

The funding distributed under the IICP is split into two phases over a twelve-year period.

Our previous findings on the IICP as a whole indicated that data gaps existed in the tracking of federal money; spending lagged plans; job creation and economic growth was lower than anticipated; and, increases in federal infrastructure spending were partly offset by decreases in provincial money.[4]

This blog post is designed to assist parliamentarians in understanding CIB’s capability in identifying and investing in infrastructure projects, consistent with its mandate. We aim to build upon our previous reports on infrastructure spending, with a focus on Canada Infrastructure Bank.

As of March 23, 2021, CIB has publicly announced participation in 13 projects to date.[5] CIB has committed $4.04 billion of capital investment for 5 projects, or 11.5 per cent of the total mandated spending. The Réseau Express Métropolitain (REM) and the GO Expansion Project comprise most of the announced capital investment at $1.28 billion and $2 billion, respectively.

At the time of this report, eight of the thirteen projects have yet to announce a financial commitment and are currently under either a memorandum of understanding, in a project acceleration phase or receiving advisory services.[6]

Notes: CIB has announced participation in 13 projects so far. Of these projects, they have released a public financial commitment to 5 projects.

In total, CIB has received 420 project proposals to date. Of these 420 projects, CIB has publicly committed to 13 projects at this time. However, CIB has finalized investments in only two projects. 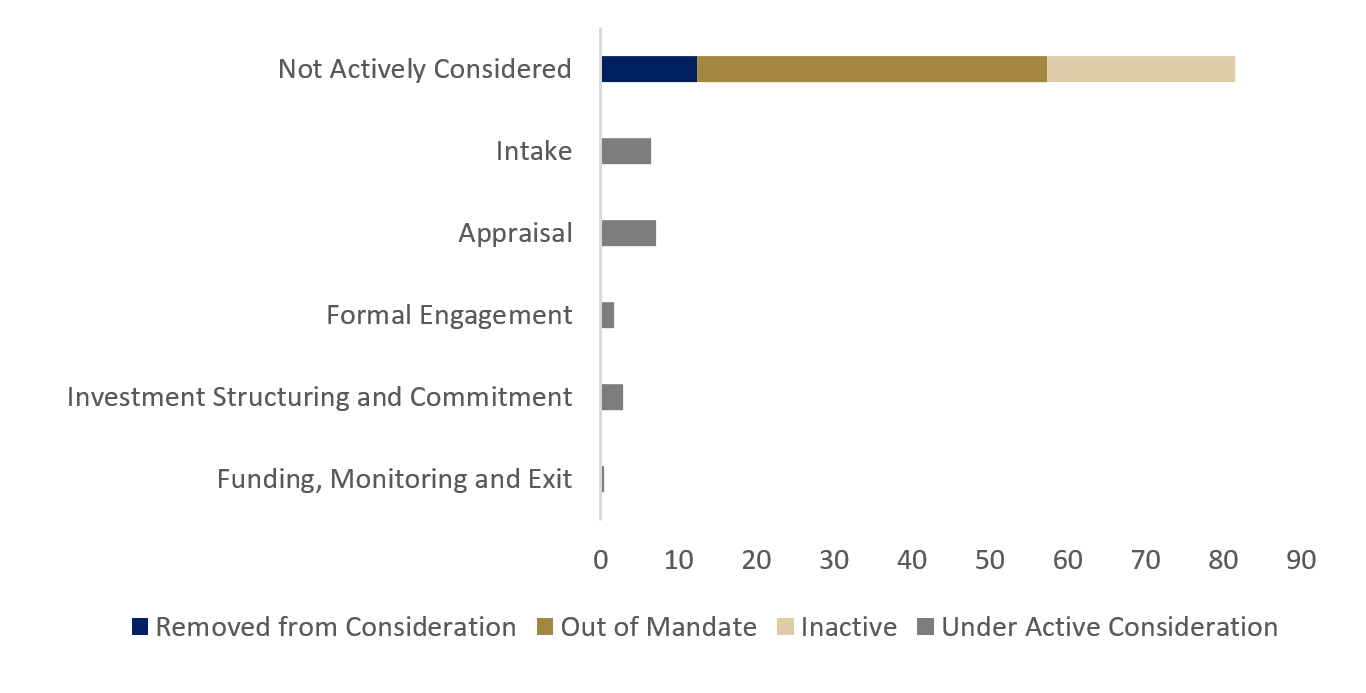 Notes: Inactive projects are no longer being considered for funding but have not been formally rejected.

In total, CIB is mandated to invest $35 billion in infrastructure projects over a 10-year period. Roughly 4 years since incorporation, CIB has invested a total of $1.23 billion, or 3.5 per cent, of its $35 billion mandate.

Cumulative gross investment of assets to 2020-21

In October 2020, the Government announced that CIB intends to invest $10 billion across six major infrastructure initiatives over the next three years with the goal to create jobs and economic growth.[8] The PBO aims to examine the feasibility of projected spending further in upcoming reports.

The purpose of CIB is to invest, and seek to attract investment from private sector investors and institutional investors, in infrastructure in order to reduce costs to government. [9]  The goal of partnering with private investors is to help deliver more infrastructure than would have been possible using only government sponsors.[10]

Of the projects for which contracts have been signed, there is no evidence that any private investment has been leveraged. CIB’s two current projects are exclusively funded by federal, provincial, and municipal levels of government. [11],[12]

Notes: According to the Statistics Canada’s Public Sector Universe, the investors under the REM and Alberta Irrigation Project fall under federal, provincial and municipal levels of government exclusively.

[2] As a result, the Government provisioned up to $15 billion in total capital losses – via forgivable interest, loan loss provisions or other financial arrangements for which the CIB’s initial investments are not made whole. Canada Infrastructure Bank, Annual Report 2018/19 (cib-bic.ca)

[12] The investors for the REM project consist of Canada Infrastructure Bank, Government of Quebec, Caisse de dépôt et placement du Québec, Province of Quebec and the Autorité régionale de transport métropolitain. The investors under the Alberta Irrigation project consist of the Government of Alberta, the Irrigation Districts and the Canada Infrastructure Bank.