The Parliamentary Budget Officer (PBO) today released an analysis of the Canada Infrastructure Bank’s (CIB) spending and investment commitments since its inception in 2017 as part of the Government’s $187.8 billion Investing in Canada Plan.

The CIB was created to invest $35 billion into large, revenue generating infrastructure projects that are developed and delivered in partnership with public, private, and institutional investors and focus on the Government’s priority areas. These priorities include public transit, green infrastructure, clean power, broadband, trade and transportation, and Indigenous communities.

Four years into its mandate, funding is being disbursed by CIB much slower than planned. In the Canada Infrastructure Bank Spending Outlook, PBO estimates that CIB is unlikely to disburse $35 billion within its 11-year mandate, forecasting a shortfall of $19 billion.

The PBO finds that the CIB’s funding delays may be due in part to policy choices. Nearly half of project submissions (189 projects) received to date fall outside the mandate the Government has assigned CIB because they are too small, lack a private or public sponsor, or are not in one of the priority areas.

The report also benchmarks the CIB’s investment activity against other Canadian public organizations with a mandate to invest in infrastructure.

“CIB has been spending much slower than planned, but funding delays are common for public-private infrastructure investment projects”, says PBO Yves Giroux. “Based on our analysis of comparable organizations, the CIB’s spending is progressing somewhat below the average rate – more slowly than Infrastructure Ontario and the Caisse de dépôt et placement, but more quickly than PPP Canada.” 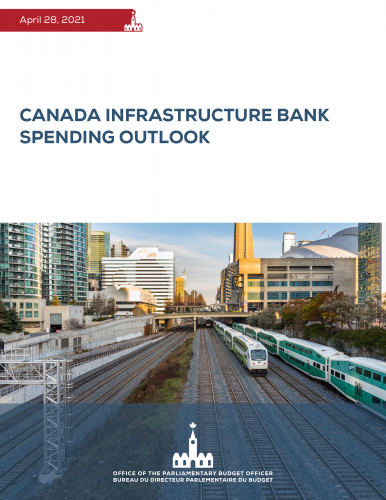