Improved outlook for the Canadian economy heading into Budget 2021

The Parliamentary Budget Officer (PBO) today released his pre-budget outlook. The report incorporates fiscal measures announced by the federal government in its Fall Economic Statement, except for the $70-to-$100 billion earmarked for stimulus spending.

“The improved outlook reflects higher commodity prices, a stronger U.S. recovery and the earlier-than-expected arrival of effective vaccines,” says PBO Yves Giroux. “We project employment to reach its pre-pandemic level by the end of 2021 and the unemployment rate to decline steadily through 2022.”

Compared to the PBO’s pre-crisis outlook, the projected level of nominal GDP is essentially unchanged over 2022 to 2025. This rebound in the Government’s tax base effectively returns budgetary revenues to their pre-pandemic path.

Setting aside the Government’s earmarked stimulus and potential Budget 2021 measures, the risks to the improved outlook are roughly balanced.

“However, the Government’s $70 to $100 billion earmark for stimulus spending and potential budget measures pose an upside risk to our economic outlook and will increase the deficit,” adds Mr. Giroux.

According to Mr. Giroux, “Should measures in the upcoming budget translate into new permanent programs that are deficit financed, the sustainable debt-to-GDP trajectory we project over the medium- and long-term could be reversed.” 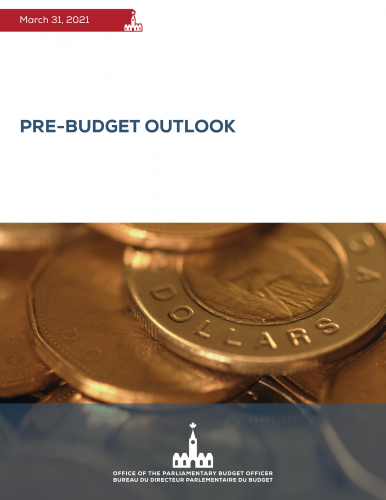