The Parliamentary Budget Officer (PBO) today released an updated cost estimate of the Canadian Surface Combatant (CSC) program. This report was prepared in response to a request from the House of Commons Standing Committee on Government Operations and Estimates (OGGO).

The report, The Cost of Canada’s Surface Combatants: 2021 Update and Options Analysis, examines the cost of the existing CSC program, which is intended to replace both the current fleet of Halifax-class frigates and three decommissioned Iroquois-class destroyers with a new fleet of 15 warships, based on the Type 26 ship design.

“We estimate the fleet of new ships, based on the Type 26 design, will cost $77.3 billion to build”, said Yves Giroux, PBO. “A one-year delay would increase that cost to $79.7 billion, and a two-year delay would see the cost rise to $82.1 billion.”

The PBO’s latest cost estimate to build the Type 26 ships shows an increase of $7.5 billion over his 2019 estimate due to updates in the ship’s specifications and production timelines.

The report also presents a cost analysis of two other ship designs: the FREMM European multi-mission frigate and the Type 31e, a class of general-purpose frigates planned for the United Kingdom’s Royal Navy.

The cost of acquiring 15 FREMM ships is estimated at $71.1 billion, while the cost of a fleet of 15 ships based on the Type 31e design is estimated at $27.5 billion. These estimates are inclusive of cancellation costs, running a new competitive design selection process, and an additional four-year delay in the start of construction. It is important to note that these ships have different characteristics and capabilities. 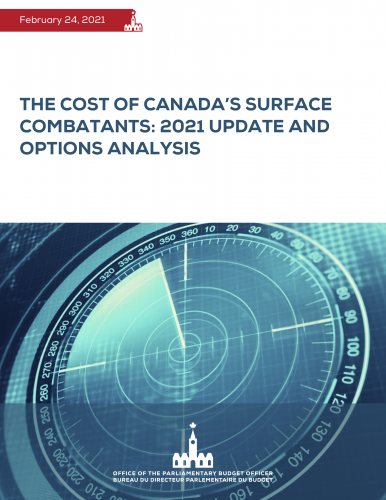 The Cost of Canada’s Surface Combatants: 2021 Update and Options Analysis