Publications will now be posted on our new website. 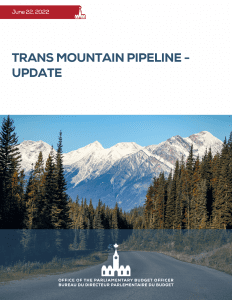 In December 2020, PBO released a report assessing the Government of Canada’s 2018 decision to acquire, expand, operate, and eventually divest of the Trans Mountain Pipeline system.

This report provides an updated financial valuation of the purchased assets and estimates the valuation’s sensitivity to several key factors. 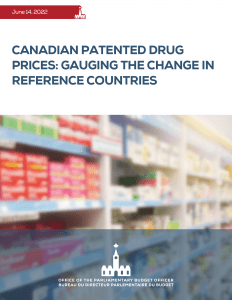 Regulatory changes for how the Patented Medicines Prices Review Board (PMPRB) formulates price ceilings for patented drugs have been proposed and are due to come into effect in July of 2022. This report examines the proposed change and quantifies its long-term impact. We find that a change to the median of eleven comparator countries is important, but that more flexibility to re-adjust prices would potentially contribute more to reducing expenditures by Canadians. 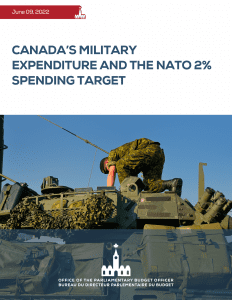 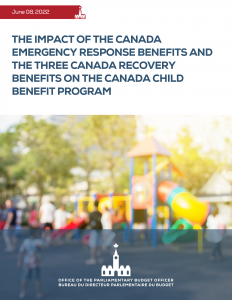 This report provides an estimate of the impact of the Canada Emergency Response Benefit (CERB) and the three Canada Recovery Benefits (CRBs) payments on the Canada Child Benefit (CCB) program. 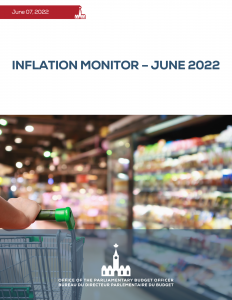 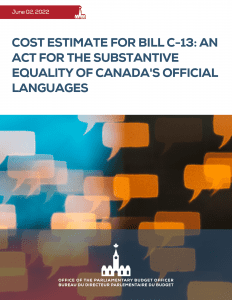 Cost Estimate for Bill C-13: An Act for the Substantive Equality of Canada's Official Languages

This report response to a request from the Standing Senate Committee on Official Languages to provide an independent analysis of the financial cost of Bill C-13, *An Act for the Substantive Equality of Canada's Official Languages*. 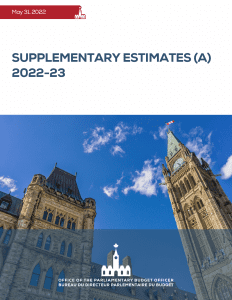 Section 79.2(1) of the Parliament of Canada Act vests the PBO with responsibility to prepare analysis of the Government’s Estimates.  To fulfill this mandate, this report presents a detailed assessment of the Government’s first Supplementary Estimates for the 2022-23 fiscal year, which seeks Parliament’s approval of $8.8 billion. 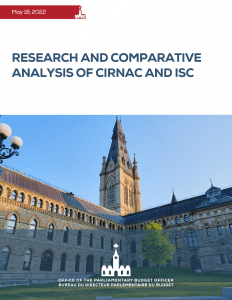 Research and Comparative Analysis of CIRNAC and ISC 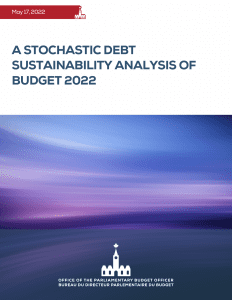 This report provides a stochastic debt sustainability analysis of the medium-term outlook presented in Budget 2022. 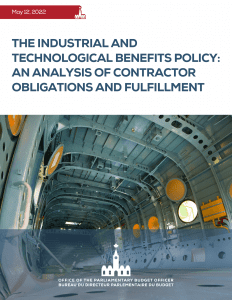 The Industrial and Technological Benefits Policy: An Analysis of Contractor Obligations and Fulfillment

This report analyses transactions and investments made from 2015-2019 under the Industrial and Technological Benefits Policy for Canadian defence and security procurement, as administered by Innovation, Science and Economic Development Canada. 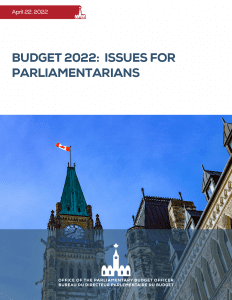 To assist parliamentarians in their budgetary deliberations, this report highlights key issues arising from Budget 2022.

On June 23, 2021, the Parliamentary Budget Officer (PBO) published a legislative note of the cost of the federal carbon tax exemption for marketable natural gas and propane used by eligible farming machinery as provided in Bill C-206, 43rd Parliament, 2nd Session. 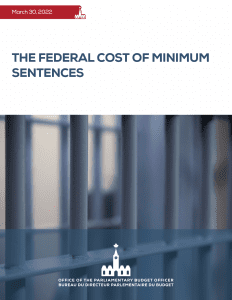 The Federal Cost of Minimum Sentences

It is difficult to draw conclusions about the impact of other minimum sentences. It is also unclear, what effect, if any, the repeal of a minimum sentence would have on the severity of sentencing. 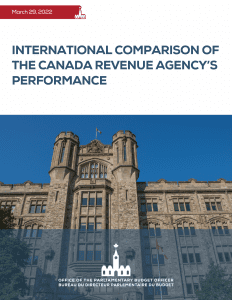 This report compares Canada’s tax administration performance with that of comparable countries with a set of indicators derived from the International survey on Revenue Administration (ISORA) 2020. ISORA is administered every two years, collecting data on the previous two fiscal years from over 150 national or federal tax administrations around the globe. 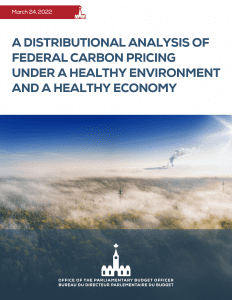 This report provides a distributional analysis of federal carbon pricing under the Government’s A Healthy Environment and A Healthy Economy plan. 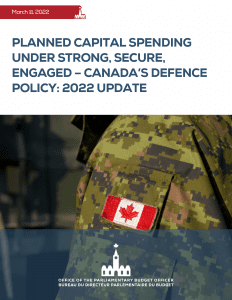 This report analyses Department of National Defence planned capital spending under Strong, Secure, Engaged, announced in 2017, as of 2022. 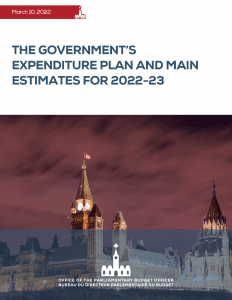 The Government’s Expenditure Plan and Main Estimates for 2022-23

This report examines the federal government’s Expenditure Plan and Main Estimates for 2022-23, which supports the first two appropriation bills that seek Parliament’s approval of $190.3 billion in budgetary authorities.

This note provides additional information related to federal infrastructure spending in Canada between 2016-17 to 2026-27. 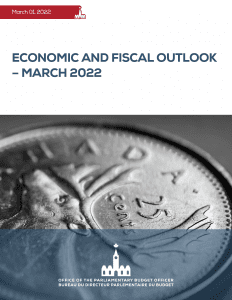 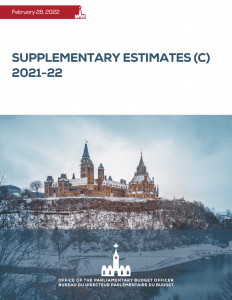 This report presents a detailed analysis of the Government’s third Supplementary Estimates for the 2021-22 fiscal year, which seeks Parliament’s approval of $13.2 billion.